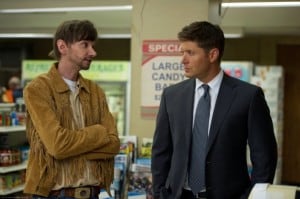 BennyÂ reappearedÂ in this week’s all new Supernatural. Â After he decided to go after his maker, Quentin, for some payback, he got sidelined by a group of vampires and some serious injuries. Â After he called Dean for some help, the two of them came up with a plan to go after the vampires together.

But when they ran into some trouble, Dean called Sam for help and the first meeting between Sam and BennyÂ occurredÂ  Â How did that go? Â About as awkwardly as you’d expect. Â For more on the episode, read our full recap and review.

DJ Qualls returns as Garth in next week’s all new episode. Â Sam and Dean roll into town to investigate a murder, only to find out that Garth is already on the case. Â He’s also taken over Bobby’s responsiblities in the hunting community over the past year which doesn’t exactly thrill Dean. Â The trio soon discovers that an “avenging ghost” is responsible for the murders. Â And it seems like Sam and Dean are finally going to have a long-overdue talk about their relationship.

Watch a preview below for the November 7th episode of Supernatural airing at 9:00 p.m. ET/PT on The CW. Browse through photos for the episode here.