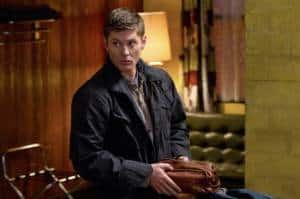 This week’s episode of Supernatural was a bit light on mythology, but enjoyable all the same. After the Amazon-chasing from last week was officially declared a bust, the boys headed out to investigate some mysterious deaths. After realizing that a few fantastical creatures were responsible for these deaths, they realized that the murder victims all had something in common: their child had recently been at Plucky Pennywhistle’s, a pizza joint/arcade for kids.

Some investigative work at Plucky’s revealed that the kids who attended were asked to draw a photo of their greatest fear, which was later used to kill the parents who acted mean or caused a scene. Sam and Dean tried to narrow down which Plucky’s employee was responsible for the magic necessary to make these fears come to life. As Dean remained behind to investigate the boiler room, Sam headed off to save a mother they thought was the next target. Dean did find the magic man, who told him that he had intended Sam to be his next victim and had sent some crazy killer clowns after him. Fortunately, Dean managed to figure out that the Plucky’s employee was doing all of this because of something that had killed his brother when they were children. Dean invoked some magic of his own and the brother’s spirit came back to kill the employee. For more details, read our full recap and review.

Supernatural is all new on February 17 and the boys revisit a case from their past that we haven’t seen before. But visiting a formerly possessed man in an asylum actually causes Sam to face his own fragile mental state and Mark Pellegrino makes a return appearance as Lucifer.

Watch a trailer below for the February 17 episode of Supernatural. You can browse through photos for the episode here.