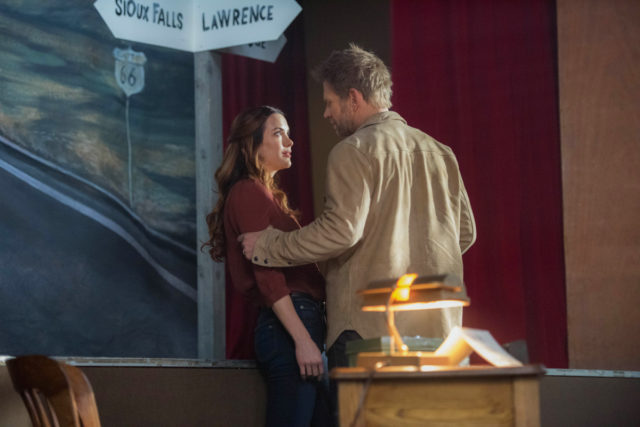 SupernaturalÂ fans have been awaiting the debut of Danneel (Harris) Ackles, Jensen Ackles’ real life wife, for some time. This week the fans got that and MUCH more. Though D. Ackles’ portrayal of Sister Jo demanded our attention every time she was on screen, it was the surprise return of a thought dead (by everyone but me, of course) character at the end of the episode that really got the fans talking. With a big return and a big addition, it was overall a humongous pre-hiatus week forÂ Supernatural.

I briefly discussed last week that it was no shock that Castiel was not able to kill Lucifer, mostly because Lucifer dominated the promos for this week’s episode. I was a little put out by that, but I forgave them, largely because they never tried to assert that it worked, and Cas didn’t seem all that surprised to see Lucifer alive. Lucifer is, however, completely devoid of grace and has to resort to stealing it from angels. That is, until he meets Danneel Ackles’ “Sister Jo”, an angel masquerading as a faith healer.

I really have to hand it to the creative team onÂ SupernaturalÂ here. We all knew and were anticipating Jensen’s better half appearing on the show. We expected it. Frankly, she was also very good. Some characters that become recurring onÂ SupernaturalÂ are dry or uninteresting at their best, but Sister Jo was unassuming but very compelling. In fact, it took only one episode for me to consider her one of the best recurring characters that the show has introduced in some time.Â  Ackles’ portrayal of Sister Jo just worked. I’m very hopeful that she’ll stick around for a good bit. That’s not why I’m handing it to them, though. Ackles’ casting was advertised to be the biggest thing about this episode, so when she turned out to be excellent in her role, as a fan I was more than happy with that. A former low-level angel takes advantage of Lucifer to climb the ranks while the Winchesters chase them is a pretty compelling story in itself. So when Asmodeus revealed that he has an archangel other than Lucifer captive… the reveal elicited squeals of excitement! Well, mine were more like manly yells. Still.

Major spoiler alert!Â Long thought to be dead, the archangel Gabriel turned out to be decidedly less dead at the end of “Devil’s Bargain”. The last time he appeared on the show in Castiel’s vision, Cas asked him point blank if he was dead, but got only a look that said “I can’t answer that…but no”. Still, Gabriel has been MIA ever since. However, our favorite trickster lives once more, greatly pleasing long-time fans of the series, and likely actor Richard Speight, Jr. as well. I mean, God came back for a season, right? Why not Gabriel? Still, even to those of us who were sure that our beloved trickster never really left us, the end of “Devil’s Bargain” was the best kind of surprise.

Overall I’m extremely pleased that Lucifer, Gabriel, and the battle of Heaven/Earth/The Apocalypse has returned to the over-arching story onÂ Supernatural.Â There’s a lot of raw material there that they’ve really left alone since Season 5. But it’s clear that as they lean back into that mythology, the episodes and the story overall get stronger. “Devil’s Bargain” was simply further proof.

A new character helps Lucifer out of a jam and a old character makes a surprise appearance on this week’s strong episode of Supernatural.