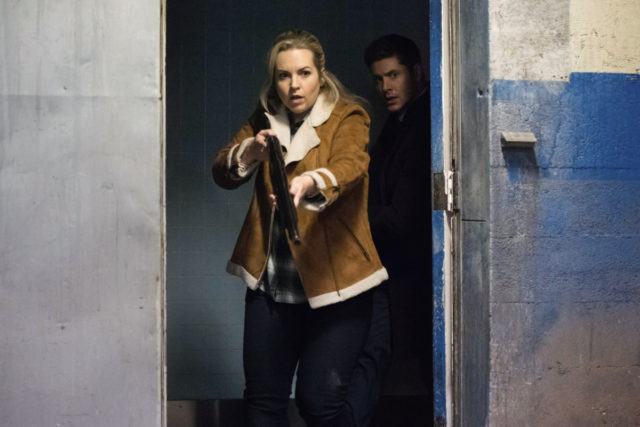 There are lots of scary things out there. Most of us aren’t normally scared of Werewolves, Vampires and Demons, but these are normal in the world ofÂ Supernatural.Â However, being alone at a sketchy truck stop and facing normal, human creepers and weirdos is something that a lot of people deal with regularly. According to Briana Buckmaster’s tweet, this is only the second time in the show’s history that the big bad of the week was not a monster, and instead a regular human being. In so many ways, this is more terrifying than a monster because, in theory, something like this could really happen. Donna’s niece could be any number of vulnerable people that we love, which is scary, but made for a compelling episode ofÂ Supernatural.Â

It was quite a treat to have Briana Buckmaster’s Donna Hanscum return for a second straight episode after the backdoor pilot forÂ Wayward SistersÂ (fingers still crossed that it gets picked up, and you can find my review here). In that episode, the comic relief and epic action sequences were strong with Donna, and she very much felt like the Dean to Jody’s Sam. In “Breakdown”, she carried a much more serious tone, proving that Buckmaster can handle both comic and dramatic stories. We watched Donna’s niece disappear, we watched her fight to save Wendy and Officer Doug’s lives, and we saw her heart break as the man she loved walked away, not being able to deal with Donna hunting monsters. Before last week it had been awhile since we’d seen Donna, but if “Breakdown” proves anything it’s that Donna belongs in this world, and it was delightful to have Buckmaster back on our screens two weeks in a row.

Aside from including/being centered around Donna, this episode dealt with both some terrifying realities of the world we live in. Even though the not-supernatural-in-any-way monster they were hunting turned out to be selling body parts so that actual supernatural monsters could eat, it was still eerily reminiscent of real things that real crazy people do. We live in an absolutely terrifying world where FBI agents could have crazy brothers who auction off Sam Winchester’s body parts to monsters. Seriously, in today’s world you can never be certain of anyone’s intentions or how unstable they are, andÂ SupernaturalÂ illustrated a terrifying reality here.

The cynicism about the world we live in was not lost on the brothers Winchester, either. The beginning of the episode showed a lethargic and beaten down Sam, reeling from the disappearance of Jack and the death of Kaia, and the depraved lengths to which humans will go to make money didn’t make Sam feel any better. Dean, ever the optimist, did his best to be encouraging and kill monsters, but when the bad guys told Sam there were millions of monsters out there that were successfully hidden, it can’t have helped his attitude. It’s created an interesting dynamic for Sam to be fed up and cynical, and Dean to be optimistic about “the family business”.

Overall this was a strong follow up to last week’s backdoor pilot, a great showcase for Briana Buckmaster, and a compelling episode ofÂ Supernatural.Â It doesn’t always take complicated mythology to make something socially relevant and emotionally complex, and they proved it here.

Sheriff Donna Hanscum seeks the boys help in finding her missing niece on this week’s compelling, terrifying episode of Supernatural