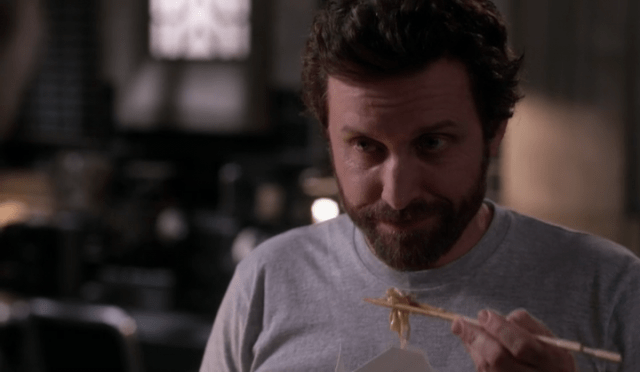 After that mind-blowing episode last week, I think I kinda expected Supernatural to pick up the pace. Of course, I also knew that last week’s episode would be hard to top off. ‘All in the Family’ makes for a fun get-to-know God episode. And in the less than smooth season that Supernatural has been having, this episode still stands out from the rest of the season. It’s fun, it’s light-hearted yet it’s damn serious at times. All of these qualities are what have defined Supernatural since Season 1. At one point, Chuck complements Dean on his porn collection. After that, we have Metatron revealing God’s plan to sacrifice himself. With a season that’s been struggling to find the right balance between fun and seriousness, ‘All In The Family’ manages to hit the sweet spot.

Oh, and Kevin’s back! And he’s gone. What the hell, guys? At least give Osric Chau more than a few stupid lines. It was a terrible way to bring him back and send him away again. Basically, Chuck just flicks his hand and Kevin pops to heaven. Not before he speaks his two lines, though. A cameo purely for shock value. The writers were like, hey since we’re on the subject of bringing people back, let’s bring back Kevin!

Cas is still being tortured and God apparently doesn’t give a damn. He’s all like: Lucifer is a disappointment. You were tools for bringing him back. But, Sam’s practically wide-eyed and wants to interview Chuck. He wants to know why planets are round and ears are weird. Dean, on the other hand is more skeptical. He wants to know where God was all this time. That at least went as expected. But the reason Chuck gives Dean is satisfying to say the least. Apparently, he wants people to be independant. Why’s he stepping up now, though?

That’s when the shock comes in. Metatron reveals that Chuck intends to sacrifice himself to Amara to save The Universe. What a splendid idea! Now, apparently, Chuck is powerless before his sister and only humans can stand up to her. But with God gone, there’s obviously not gonna be much help. Dean tries to convince him and he fails. So, what do you do to convince God? Mount a rescue mission to save his estranged son of course.

Oh, meanwhile Amara isn’t exactly just torturing Casifer and chilling. She’s out for blood and wipes out a whole town. But after Kevin goes to heaven, there’s a new post for a Prophet. And a new Prophet hath arrived! And he’s named after Donatello the ninja turtle. And he’s an atheist. But, when faced with Chuck in all his pantless might, he witnesses the light of the Lord and turns. Then he meets God’s sister and God’s son who’s possessing an angel. Like us, he concludes that the Supernatural universe is messed up.

Well, they save Casifer and barely get out. Except that Metatron’s dead. Of course he’s supernatural-back-next-season-dead. But don’t expect him to be back anytime soon. His death wasn’t exactly spectacular. And believe me, if he were actually dead, we’d know. But Casifer is out and maybe we get to see Mark Pellegrino soon? Oh, and did I mention that Amara basically wants to merge with Dean or something? I don’t know what to call it. Does she want to eat him or mate with him or absorb him? Anyways, ewww Amara. And that dialogue was far too cringy.

Supernatural Season 11 Episode 21 Review "All In The Family"

Supernatural delivers a great follow-up to last week’s episode as Amara’s plan for Dean becomes more clear and Chuck’s character starts to flesh out. While Kevin’s cameo was rather shameful, other parts of the episode worked marvellously in a fast-paced and engaging episode.