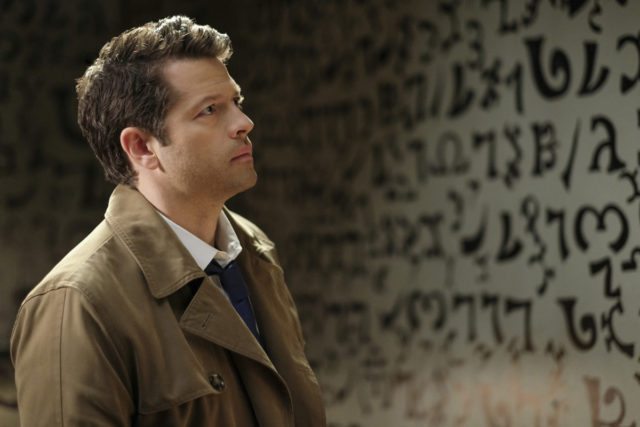 As we go further into the each season ofÂ Supernatural, things always tend to get more mythology-heavy. “Bring ‘Em Back Alive” proves that Season 13 was certainly no exception to that trend. I certainly appreciate most (if not all) of the one-off, monster of the week type episodes, but theÂ SupernaturalÂ mythology is what attracted me to the show years ago. Needless to say, I was ecstatic when they followed the saga of Dean and Ketch in the alternate world and Sam and Castiel tended to Gabriel immediately. As a long time fan, I’ve been anxious to discover how Gabriel has spent the intermediate time, other than when he (now quite obviously) appeared to Castiel in a “dream”.

Gabriel’s saga was by far my favorite, but there were two other stories in this episode. The first, Lucifer and his pal Sister Jo (Danneel Ackles) trying to take the reigns of heaven and discovering that it is actually quite difficult. This was my least favorite story of the episode, but perhaps just because the others were so compelling. Still, Lucifer creates a powerful point here about the disdain for him and it creates a powerful illustration (in my mind, at least) for real people (and Supernatural characters)Â and their disdain for God. Lucifer seemed to think ruling heaven would be an easy job, but so far it hasn’t worked out. I wasn’t particularly moved by this story, but I still really like Sister Jo and with Asmodeus out of the picture (!!), Lucifer and Gabriel will have to intersect at some point.

A far more interesting storyline was Dean and Ketch in the alternate universe, and it gave fans of the show a wonderful treat with the inclusion of alternate universe Charlie Bradbury. It’s so good to see Felicia Day’s return to theÂ SupernaturalÂ  universe. As much as I wish they’d bring our Charlie back from the dead, this was the next best thing. Of course, Dean and Ketch got sidetracked with Charlie and couldn’t complete their original mission, but I didn’t care too much because of how happy seeing her made me. I also like the bond forming between Dean and Ketch, and think that Ketch could make an excellent recurring frenemy to replace the likes of Crowley. The dynamic between Dean and Ketch just works, and maybe Ketch and alterna-Charlie will become buddies.

Finally, the Gabriel saga has been the most compelling. I had the most questions about it, considering that Gabriel had been gone a long time and was largely a fun-loving character. To see him broken down by his time as Asmodeus’ prisoner was heartbreaking and had established Asmodeus as a great danger. But…perhaps not. Once Gabriel had recounted his story (in the form of Enochian scribbles on the wall) and gotten his mojo back, he dispatched with Asmodeus rather quickly. I enjoyed seeing Gabriel and I really wanted to know where he’d been, so I enjoyed finding that out. However, any establishment they had done all season long that made Asmodeus into a primary villain that even Ketch had to run from was unceremoniously erased. The power shifted extremely quickly, which undermines some of the work they’d done previously. Unless one of my theories comes true. More on that momentarily.

Overall I was pleased with the episode because it gave me some answers I needed, brought Charlie back into my life, and finally told us where Gabriel has been. Still, it undercut some of the work they’ve done with Asmodeus. But, it’s been a long time since I’ve been this confused/excited for what’s to come onÂ Supernatural.Â

Dean and Ketch discover a familiar face in the alternate universe, while Sam and Castiel tend to Gabriel on this week’s mostly strong episode of Supernatural.