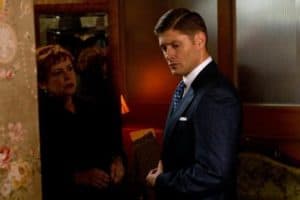 When Supernatural is firing on all cylinders, there’s nothing better. This week’s new episode gave us an unforgettable hour. It may have been more of a stand-alone episode, but there were enough pieces of mythology woven it to progress the storyline, touch on past memorable events, and give us some hint at the future.

Let’s set the stage: it’s 2012 and Dean is still researching Dick Roman. Late at night, Sheriff Jodi Mills calls Sam to let him know about a strange case in Ohio involving a victim who looks mummified. The boys head to town, find an abandoned house to squat in, and start their investigation. They soon realize that a man in a fedora hat (guest star Jason Dohring) is generally around the crime scenes and track him down. The boys separate to approach him from different sides, but Dean stumbles across him “feeding” from a victim and rushes him. A red light appears and suddenly Dean and Mr. Fedora are back in 1944. Mr. Fedora gets away, but not before Dean spots a distinctive ring on his hand.

Since he’s carrying a gun in the middle of the street, Dean promptly gets arrested. Luckily, none other than Mr. Eliot Ness stops by. Dean immediately has a man-crush. After all, The Untouchables is one of his favorite movies. After taking a chance and describing what happened to him, Dean is kind of surprised that Ness believes him and realizes he’s a hunter and they’re both tracking Mr. Fedora. Ness suggests they head off to get Dean some clothes appropriate for the time period. As it turns out, Ness’ seamstress (Ezra) also happens to be down with the hunting life. She outfits Dean in a snazzy new suit and does some research about Mr. Fedora.

Back in the present, Jodi offers to come help Sam track down Dean and brings him some boxes of research from Bobby’s storage unit. In 1944 and the present, both teams realize they’re tracking Chronos, the God of Time, who kills people in order to recharge his time travel batteries. Sam wants to summon Chronos, while Ness wants to figure out a way to kill him.

Ness and Dean eventually find Chronos, but are shocked to find out he had a pretty, young girlfriend named Lila. They tracked him home and Ness sent Dean back to Ezra for more information while he did some surveillance. Ezra gave Dean a stake dipped in blood to kill Chronos, but Dean realized that killing him meant he would be stuck in 1944 forever. He decided to pull a “Back to the Future III” move and left a note for Sam in 1944, in the same house he and Sam later squatted in.

The note lead Sam and Jodi to Lila in the future and they were able to pin down the exact moment when Chronos and Dean would be together again. Hastily putting together the spell for the ritual, they were able to summon the God and Dean back to the present, while Ness managed to throw the stake to Dean in the past right before he disappeared. Sam staked Chronos, who warned them that their future was filled with thick, black goo (ie. the Leviathans), and then died. Fade to black.

Concluded on next page….