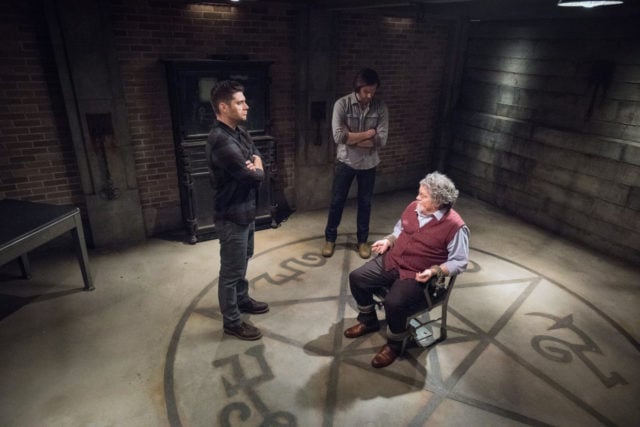 After a short hiatus, we’re back with new episodes ofÂ Supernatural.Â I can’t believe that the creative team is still coming up with interesting angles and stories for this world 13 seasons in.Â  “Good Intentions” was another episode that I found to be compelling, entertaining, and still furthered their story and ultimate goal. I don’t have any major issues with the story, and I’m most concerned with what’s going to happen next. I’d say that bodes well for the season. When someone is looking forward to the next episode in a serialized story, the show is doing its job.

I wasn’t expecting to like the alternate universe story as much as I do. Answering the question “What would the world be like without Sam and Dean Winchester?” has proven to be beyond compelling. We all knew that it was likely an apocalypse battle would take place between Lucifer and Michael if the Winchesters never existed, and now we know to what extent. The idea that one reversed decision can change the course of history has been explored in other shows, and it’s a fascinating concept that works well here.Â  On top of that, we get to use the alternate universe as a showcase of sorts for both Samantha Smith and Alexander Calvert, who have been excellent on SupernaturalÂ of late. Calvert depicts Jack’s desire to be good and do right by Sam and Dean to perfection, and Smith’s weary but determined portrayal of Mary Winchester is moving after all this time.Â Of course, the actual best part of the alternate universe is more opportunity for Jim Beaver as Bobby Singer, whom I will never, EVER be mad about seeing, even if there are no idjits in sight.

I’ve been clamoring to see more of the alternate universe, so it surprised me when the story with Sam, Dean, and Castiel was equally compelling. We knew that Donatello wasn’t 100% “Team Free Will” a few weeks ago, and this week’s episode leaned hard into that story. I appreciated the differences between Donatello without a soul and Sam without a soul. Sam was relatively similar to his old self, but with less conviction, as a soulless shell. Donatello, on the other hand, was a shell that was simply impressionable and susceptible to corruption. The tablet he was translating, along with Asmodeus, corrupted him fully, and it was a compelling saga. My favorite two things about this story were A) that Castiel had to be the one to make the morally gray decision to extract the spell from him, and B) that Sam was not OK with that approach, illustrating the contrast from 7 years ago when he had no soul.

Overall, I very much enjoyed “Good Intentions” as a return from the brief hiatus. It wove several storylines together seamlessly and managed to stay compelling throughout. I’m looking forward to further exploring these stories.