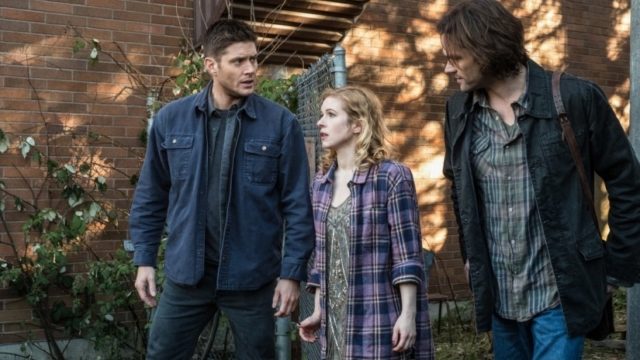 “Scoobynatural” was certainly a tough act to follow. I’d almost want to make it a special episode to air at a different time of year, because it was such a hit that anything that follows it is going to be a letdown. Fortunately, theÂ SupernaturalÂ team did a great job of getting back to the mythology but still having a procedural-like problem to solve. After all these years, I can still get excited by a classic mythology episode ofÂ Supernatural.Â This one in particular furthered their mission to find their mother and Jack, and revisited the mythologies like the Men of Letters and archangels(!!!). Sure, “Scoobynatural” was a historic feat for the long-running series, but as a long time fan I found “The Thing” to be almost as compelling.

Any chance thatÂ SupernaturalÂ has to explore new mythology, they should take. The monster they uncovered at the hidden Men of Letters site introduced a “goddess” from an alternate universe, bent on consuming the world. The only way to stop her was to send her back to her world. This is a clever maneuver byÂ SupernaturalÂ for a couple of reasons. One, it introduces a new baddie that can be reintroduced sometime in the future, especially as they continue to explore alternate worlds. Two, it lends credence to the inevitable future seasons of the show and gives them more grounds to explore other things. The whole main story involving this monster was compelling, but was still the least compelling part of the episode.

Far more compelling was the story of Mr. Ketch being in WAY over his head with Asmodeus. Ketch has long been muscle for hire, and would do anything for the right price. Now, however, he realizes that Asmodeus poses a serious threat to the world as we know it, and doesn’t regard Ketch’s life at all. So, to get back at Asmodeus, Ketch frees the captive, mostly grace-less Gabriel from Asmodeus’ clutches and escapes to the only place he knows he would be safe: the Men of Letters bunker. While not warmly welcomed by the Winchesters, bringing Gabriel with him softens the blow, and creates some new character pairings that I’m excited for, like Dean and Ketch going together into the alternate world. Dean and Ketch will make a great odd couple, but I’m even more excited to find out what’s been happening with Gabriel.

With this many episodes left in the season, the race to the season ender is bound to be a wild ride. “The Thing” was no “Scoobynatural” in terms of how it will be remembered, but followed that act just about as well as anyone could hope.Â SupernaturalÂ has been aces lately.

Sam and Dean hunt down the final piece to create their spell, and Mr. Ketch switches sides in the war on this week’s strong episode of Supernatural.