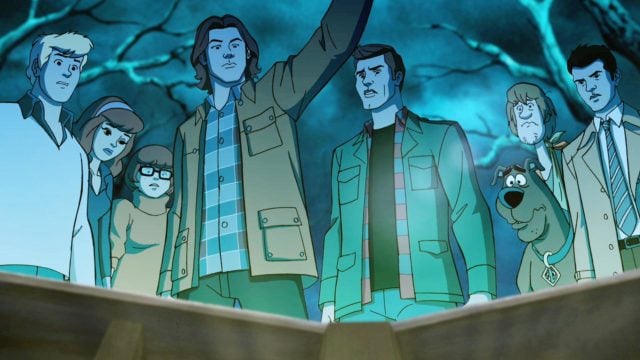 I have to admit that at Comic-Con, when I first heard about the crossover between Supernatural and Scooby-Doo, I was pretty skeptical. My first thought was “they’re running out of ideas”, and I held on to that belief for awhile. Still, as a long time fan of both properties, I remained optimistic. AsÂ Supernatural’sÂ season has gotten better and better, I became more optimistic than ever that perhaps this crossover would rivalÂ Avengers: Infinity WarÂ as the “most ambitious crossover event of all time.” And after watching…I wasn’t wrong.

The first concern I initially had regarded the premise. I wondered how they would do the crossover logistically, especially after they announced that it wouldn’t be a trick from Gabriel. I also wondered if they just lied about that, considering (SPOILERS) we saw Gabriel alive a few episodes ago. But since they didn’t want people thinking that way before they saw Gabriel, nipping it in the bud was a good idea. It also led to a great throwaway line that I’ll get to in a minute. Ultimately, the premise they chose with the real ghost worked well.

Some episodes ofÂ SupernaturalÂ are really dark, while others are really, REALLY fun. “Scoobynatural” easily falls into that second category. I was a fan of Scooby-Doo growing up, just like Dean (and Sam, we find out later) so Dean’s reaction is one that I would’ve had too. When you put Castiel in with Scooby and Shaggy, Dean trying to hit on Daphne, and Velma and Sam combining their intellectual prowess, you get a hilarious, most-fun-I’ve-had-watching-TV-in-weeks episode.

Perhaps my favorite element: they were able to make the Scooby-Doo world a little darker. To have Sam and Dean accidentally bring a real murder into the Scooby-verse with them added an extra layer and raised the stakes considerably, adding layers to an episode that was extremely fun.Â SupernaturalÂ has always been good at having high stakes even through extreme silliness, and this was no exception.

One of my favorite things aboutÂ SupernaturalÂ is that after 13 seasons, they still know how to have fun. Adding the usual monster-hunting seriousness in the mix with the silliness that is Scooby-Doo worked way too well, and it makes me wonder what other fun things this team can dream up. Whatever it is, I’m game. I’ll never doubt you again.

This episode will go down as one of my all-time favoriteÂ SupernaturalÂ episodes, no contest.

Sam, Dean, and Castiel get sucked into the TV and join forces with Mystery, Inc. to track down a ghost on this week’s hilarious episode of Supernatural.