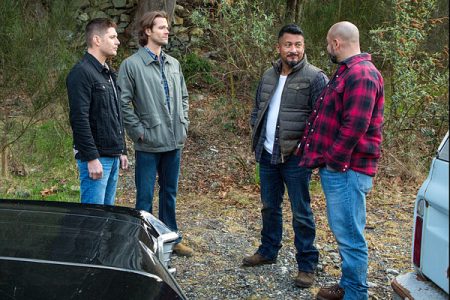 A spec script is a script that you write to show a, uh, show runner that you get the world of their show, or if not that specific show, that they understand the world of a show in general. You don’t write specs with the idea of selling them to the show; that is, you don’t write aÂ SupernaturalÂ spec with the hope that it will get bought and produced.

The reason I bring all of this up, (somewhat anticlimactically, I realize now), is that this episode ofÂ SupernaturalÂ feels like a spec script. It feels like someone has been a dedicated watcher of the show, and and wrote something to try and impress Jeremy Carver, and then they filmed it right after. It’s almost an episode ofÂ Supernatural; it’s almost right, it almost hits the target, but instead glides by.

The direction does it no favors. Every show has a visual language, and breaking that visual language muddles the show. There is a reason a movie has one director, and TV shows are directed uniformly. You are creating a consistent, lived-in world; if, say,Â Game of ThronesÂ decided to portray Castle Black differently, it would change your perception of the events that occurred there. You have to be careful.

This direction as not careful. Scenes lasted too long, dialogue landedÂ awkwardly, and ultimately, there was nothing to be learned or gained from an episode like this. It was filler, and barely functional filler at that.

I don’t have much to say about this episode. I wasn’t particularly impressed by Jesse, or his arc. Cesar was better, but there just wasn’t much there. I didn’t really care that they got to escape hunting. There was no emotional resonance for me. Thematically speaking, them breaking free of the hunter lifestyle is well-trod ground forÂ Supernatural.

Whatever. It doesn’t really matter. In a 23 episode season, not all of them can be winners. I still think this eleventh season has been mostly excellent, and could really go out with a bang. However, “The Chitters” won’t be what drives it towards the finish line.