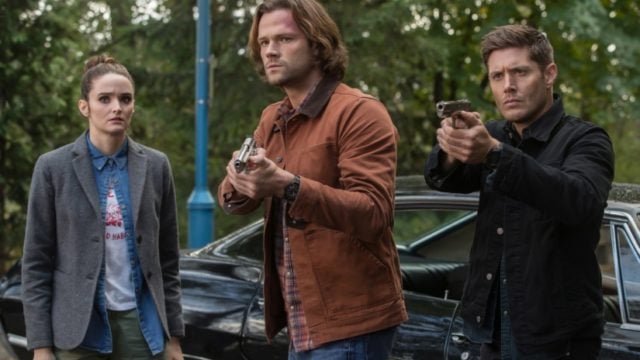 Friends andÂ SupernaturalÂ fans, I must apologize for the absence of my review from last week. I was vacationing with family out of state, and it was impractical for me to complete my review in a timely manner. Here are my thoughts on the previous episode in a nutshell: I liked it. Setting up new villains and bringing Lucifer (but not Mary) back in an interesting way are setting up a fun and exciting rest of the season. I’m thrilled to have Mark Pellegrino back on the show full-time, and the stakes are higher than they’ve been in years. “The Scorpion and the Frog” was a little more contained and in the procedural style thatÂ SupernaturalÂ has come to be known for, but they’re still managing to pioneer new territory and introduce new characters with recurring potential along the way.

Having no leads on Ketch or Jack, Sam and Dean (somewhat inexplicably) take a meeting with Bart, Crowley’s replacement as THE crossroads demon. He wants Sam and Dean to steal a trunk from a hoarder/collector named Luther Shrike. Demons are warded from the property, so why not get the best hunters in the business to join your team (appropriately named “Smash” and “Grab”) and steal something for you? I would say that it makes no sense that the Winchesters would agree to something like this, except that they are desperate to find Jack, and their prize would be a locator spell specifically geared toward Nephilim. Something I’ve always admired aboutÂ SupernaturalÂ is the way that they’re able to intertwine their overarching, season-long plots and use them seamlessly within the confines of an otherwise standalone episode, and getting a spell to track Jack gave a great excuse to not only have some fun with a heist-centric plot, but also to introduce a potential recurring character in Smash (Alice).

“The Scorpion and the Frog” did several things for the largerÂ SupernaturalÂ story. Namely, it illustrated the lengths that Sam and Dean are willing to go to find Jack.Â  I can’t imagine the Winchesters even giving this heist a second thought if they already knew how and where to find Jack. Some naysayers would argue that this episode illustrates the moral decline of the Winchesters, but I would argue that there’s still some good to be found. While heisting with expert safe-cracker “Smash” (Alice), they discover that she is indebted to Bart because of a deal she made at the crossroads years ago. Some quick thinking by the Winchesters got rid of Bart and freed Alice from her never ending debt. I was excited by this for a couple of reasons, but mainly that Alice was an interesting enough character for me to want to explore further. She’s the perfect candidate to recur in this universe, as I’m sure that the Winchesters could use a safe-cracker in more than one scenario. She’ll never replace Charlie, but overall Christie Burke did a great job and I hope to see her again.

Overall, I enjoyed this episode quite a bit. It feels like theÂ SupernaturalÂ of old, but the story is still evolving and changing. I don’t know that I will ever tire of watching this show. “The Scorpion and the Frog” was nothing new, but there’s a reason this formula has worked for 13 years.

Supernatural airs Thursdays at 8/7c on the CW.

Supernatural Season 13 Episode 8 Review: "The Scorpion and The Frog"

Sam and Dean agree to help a demon steal something to try and track down Jack on this week’s strong episode of Supernatural.