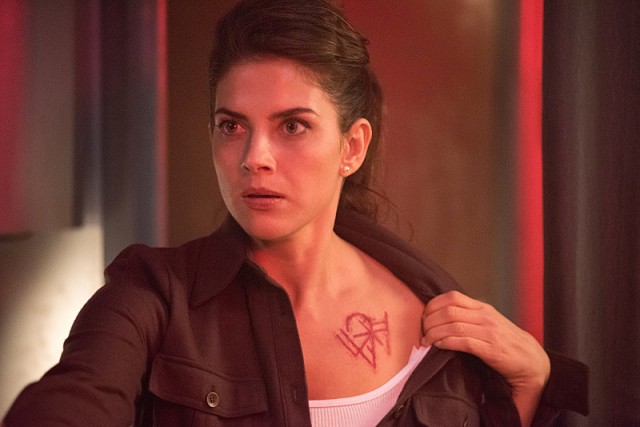 To die with purpose; to fill with light, and burn a hole in the clouds; to do what must be done, to end what never should have been.

This broken, warped, scratched and grayed piece of wood, imbued with power, as touched by an absent father and master; channeled by Delphine, the only hero worth watching, and the kind of hero in which her final pages are at the beginning, instead of at the end, where they belong. The Captain of the Bluefin, and the sailors under his command; who smoke cigarettes, and read Flash Gordon, and who chose to die long before Dean Winchester watched them do so. Delphine, and the Captain, and the Sailors; filled with fear, and shaking legs aching to run, and they die in spite of those who wish them dead.

Lucifer makes no pretense. He drops in and out of Cas’s voice, and rhythms, and beliefs. He keeps Sam alive, not out of a desire for torture, but because he simply hadn’t taken the time to rip him apart from the inside, and scatter him on the walls of the only home Sam has ever known. Lucifer makes noise about Sam being the girl who always turned him down; but Lucifer just hadn’t thought of killing him yet. Sam wasn’t a threat, and is not a threat. Sam is a nuisance, and a fly, and a man who cuts open his own palm in stoic silence so that he can send away the body of the only friend he would call his brother.

Lucifer comes to the bunker, because he doesn’t know what else to do. He is not smart, or clever, or brave; he comes to the bunker to watch the Winchesters, and latch onto their coattails, and to smirk as they argue. He believes himself to be the cause. He believes that he has sown discord. But what Lucifer (and the rest of not smart, not clever, and not brave archangels) do not understand is that arguments and anger and all the rest of the emotions are what make humans work, and work well. Humans communicate, and fight, and progress through history. The archangels mistake their bloodshed for a terminal weakness, and mistake their own indifference as harmony. To argue about the safety of those you love is not bad, or broken, or deficient; it is what we do, and how we grow. Lucifer cannot grow, will not grow, and will smirk and show his teeth, because when it comes down to it, Lucifer is not smart, or clever, or brave. He cannot possibly understand.

The only kind of being that locks up another being is one who has nothing to offer. Crowley in dirty, unflattering clothes and a spiked dog collar is a funny image, but means nothing. Lucifer was born with his power; he was given his strength. He can snap his fingers and rip you apart at a molecular level, but Crowley could too, once. Crowley is evil, and manipulative, and deficient. But he is smart, and clever, and brave. Lucifer is a ; all he knows is combat, and that is why he always, always loses.

Sam knew. He knew from the moment Cas walked in the bunker. Perhaps he knew before, when Cas came out of The Cage. He could feel it; that psychic wound, cut to the bone and further still, echoing when Lucifer is present. He sees it, and Dean doesn’t; Dean rushes headlong into a burning building, too focused on his goal, and he misses the cracking of a collapsing roof.

This episode of SupernaturalÂ was excellent.

Dean goes aboard a submarine, Cas’s secret is revealed, and Sam watches in horror in tonight’s Supernatural.