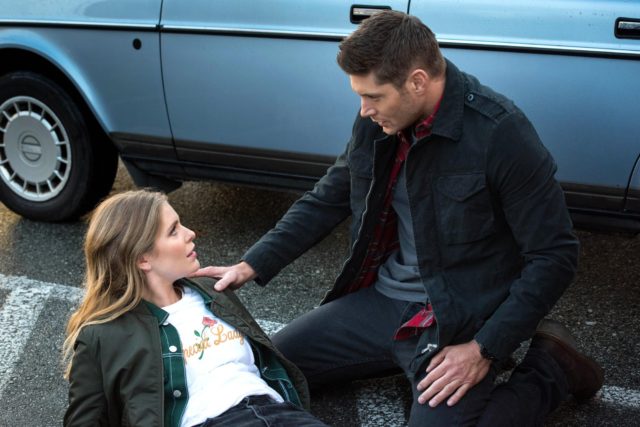 Fans of any television show know that when a show inches close to the 300 episode mark, there are bound to be some duds. This episode of SupernaturalÂ definitely falls into that category. “Various & Sundry Villains”Â clearly had multiple purposes within the larger story, which it accomplished with relative ease, like rescuing Castiel and Lucifer from the bowels of hell and bringing Rowena back into the fold. But the way it got there really didn’t land, so the plot with the young witches felt both excessive and unnecessary.

First of all, I have very much missed Ruth Connell and I was glad to see Rowena decidedly not dead. With Crowley dead, this creates a much more interesting dynamic between one of the world’s most powerful witches and the brothers Winchester. She was ambivalent at best to learn that her son was a hero, not the primary villain, in the good fight against evil, which was maybe the best part of the episode. What I’m trying to understand is why Rowena took the approach she did to get the page from the book. The Plum sisters wanted to revive their mom, but why else would Rowena get involved with them. She knew that Sam and Dean had the book, and Sam ultimately gave her the page she was seeking. So, was it a trust move? Does she want the brothers Winchester to trust her in the future?Â  Because she probably should’ve just come out with what she wanted from them if that was the case. Did she genuinely want to help the Plum sisters? My guess is no, since she killed them. My problem with the episode in a nutshell is that it largely focused on this story and the return of Rowena. While the love spell story with Dean was pretty funny, there was no reason for the story to exist.

Far more compelling was the story between Castiel and Lucifer, though it was decidedly B-plot. I was expecting Cas to finally give in and give Lucifer some grace so they could get out of the jam they were in. Instead, what happened was far more compelling. Castiel outwitted both Lucifer and their captors, and used Lucifer as a tool to get out of the jam by riling him up. It was clever, entertaining, and would have been a great cliffhanger…if it wasn’t for the preview for next week’s episode. Still, I’d like to have spent more time on Lucifer and Castiel and less time on the circular plot of Rowena’s return.

Ultimately, the episode spent too little time with Castiel and Lucifer, and too much with Rowena manipulating and double crossing people (some of whom should be smarter by now). Still, Ruth Connell is back onÂ SupernaturalÂ and the plot-at-large is shaping up to be more and more compelling by the day. So all things considered, “Various & Sundry Villains” is a misstep, but not an egregious one.

Rowena returns and seeks the Winchester’s help on this week’s mediocre but important episode of Supernatural.