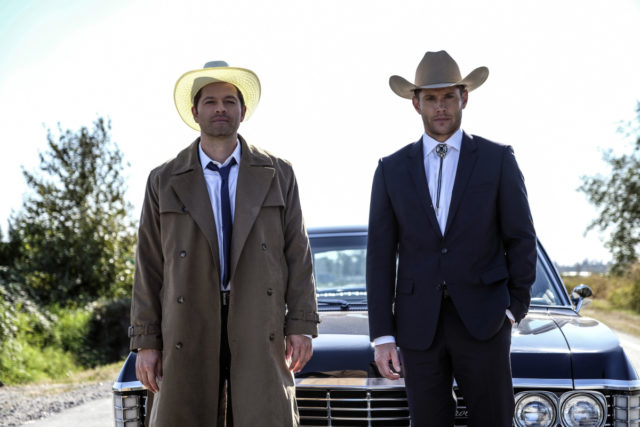 It’s no secret that I enjoy a good episode ofÂ Supernatural.Â I love serious episodes and all the issues that the show deals with. I love the intensity that it brings to certain stories, and I love being genuinely terrified by a good scary story. But for me, whenÂ SupernaturalÂ is at its absolute best is when it tells a story of a paranormal creature being hunted, and makes me laugh while doing it. The funniest episodes are the best episodes, and “Tombstone” was hysterical.

Don’t get me wrong. Watching the journey of “Team Free Will 2.0” has been fascinating so far. Watching Sam and Dean struggle to parent Jack and work through the loss of Mary and Castiel was compelling and gave us some really emotional moments. But the resurrection of Castiel (which we all knew was inevitable) brought such joy to Dean, and when Jack found them a case in cowboy country, that made for one of the funniest, most entertaining episodesÂ SupernaturalÂ has done in a long time.

I guess that’s my main point. I adored how giddy Dean was throughout this entire episode. Not only did he get Castiel back, but working a case involving a ghoul impersonating an outlaw and Dean and Castiel impersonating Texas Rangers made Dean a happy little cowboy. We’ve seen the Winchesters through so much loss that having Dean be happy was essential. Otherwise, the story starts to be doom and gloom all the time and it can take its toll on viewers. The decision to give “Tombstone” this lighter tone worked out for the good of the show, and it was an extremely entertaining episode.

Of course, it wouldn’t beÂ SupernaturalÂ without a deeper, darker meaning. Jack’s confidence was boosted by Castiel’s return, too. Unfortunately, that led to Jack intervening in a gun battle with a ghoul, and accidentally killing an innocent man. Of course Sam, Dean, and Castiel have all killed before and their victims have sometimes been innocent, but this is something that Jack has never had to deal with before, and it takes a heavy emotional toll on him. Those of us who have watched all 13 seasons have become desensitized to the constant barrage of violence in this show, but in the very beginning Sam and Dean were very conservative and concerned about harming innocent people. Jack gave them pause to think about all the things that they had done, and to try and console someone who’d taken an innocent life for the first time.

Overall, “Tombstone” was an absolute blast. It had stakes, emotional weight, and was one of the funniest episodes ofÂ SupernaturalÂ that I’ve seen in a long time. I hope to see more episodes in the near future that embrace the ridiculous and fun potential that this show possesses.

Sam, Dean, and Jack reunite with Castiel and they all go on a ghoul hunt in cowboy territory on this week’s strong, hilarious episode of Supernatural