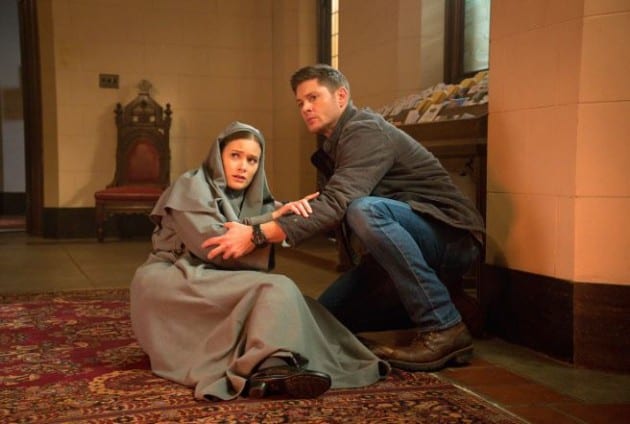 This week’sÂ SupernaturalÂ did things a little differently. Usually, they have a pretty concrete formula (as does every TV show, don’t get it twisted) that they stick to. It’s a simple and effective one: the boys show up, the boys investigate, side characters come into play, blah blah blah. But instead of the usual, we were dropped into a discussion between two nuns, pretty much out of the blue. Besides the fact that it fails the Bechdel test (which, you know, of course it does), it was very off-putting to just be dropped into this conversation. There was no set-up for it, and it didn’t make any sense until the end. I suppose the latter problem may not be as big of a deal to some, but I wasn’t a fan.

But them doing things differently didn’t equal doing them well. Another part of aÂ SupernaturalÂ episode that we’re all very familiar with is how the episode’s plot (with a side character, oftentimes) parallels whatever the boys are going through. This episode used the head nun as a parallel for Dean’s struggles with The Mark; he’s basically seeking advice for how to believe in something higher than himself. But it’s just not well done. The nun gets one line of dialogue about it, and they never bring it up again. Dean has a more in-depth discussion with the priest, but even that is standard ‘Dean admits his pain’ fare. There really wasn’t any sort of work put into making that parallel real or alive, at least to me.

The head nun, as well, was very lackluster as a character. The actress playing her was game and did a very good job with the material she was given, but I never quite understood what they were doing with her. Besides the fact that we were randomly introduced to her close to the beginning, we didn’t know anything about her. When asked about ghosts, she gave no indication that she believed in them, even though she did; now, on it’s face, I’m fine with that. Subtlety in fiction gives it strength. But considering that we’re watching a television show (or, you know, consuming a piece of fiction), there should be some indication of where we’re headed with her. It’s outright deception on the part of the author (a trick, more or less) that allows her story to unfold. As such, we lose any sort of internal struggle that she might be going through in perhaps telling the boys about her friend the ghost.

The dialogue wasn’t great as well. You could see the set-ups for punchlines a mile away. It was just a strange episode. You could see the strings of fiction being pulled as the episode moved along. The characters’ motivations were too transparent, to me, and while I’d never accuseÂ SupernaturalÂ of being too subtle, I think that, in this case, perhaps they were. Really, though, they were faking subtlety by making things opaque and vague instead of ambiguous.

And, for like the millionthÂ episode in a row, Dean changed his mind about what he was going to do about The Mark. First, he wants to fight. Then, he doesn’t’ want to fight; he just wants to help people. Now, he wants to find a mission. I don’t even think these things are that dissimilar; rather, my problem is that at the end of every episode they feel the need to have Dean make a proclamation of sorts. They do not. Just let it breathe, man; let a few episodes pass.

– Yo, can Dean not flirt with every woman?

– This episode also had the stuff with Rowena and Olivette; apparently, the Witches Coven had all their stuff stolen by the Men of Letters, and that’s how Rowena and Crowley tie back in. Ugh.

– I just; why? Why can’t Rowena just make a move against the Winchesters for other reasons? Why does there have to be this big cosmic heavy-plot reason? I don’t know, man. Let her make character decisions instead of plot ones.