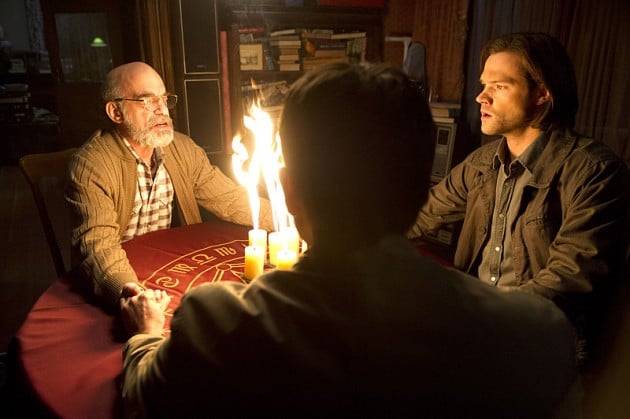 Tonight’s episode of Supernatural did a really good job of moving plot, even if it was in directions I did not expect. They were good directions, I think, but at some points they didn’t really make a whole lot of sense. Namely, it boils down to Rowena and her actions. She spent the majority of her time this season trying to convince Crowley to turn on the Winchesters; she had done such an effective job at a long con that Crowley sincerely believed that she loved him. She also knew that it would take something extraordinary to turn Crowley against the brothers, and yet instead of telling him about the literal treasure trove that the boys were sitting on in terms of the witches and their spells, she tries to fake an attack.

Not only does she try and fake an attack, but it’s a stupid plan. First, she tries to kill Dean Winchester, which would only upset Crowley (and Sam, who would rain down actual Hell). Then, she tries to fake a beating from Dean Winchester and expects Crowley to have sympathy when she’s the one who tried to kill him. Taking aside the fact that Crowley and Dean have a real relationship, he’s not gonna storm the battlements because she went and got herself beat up!

It’s cool to see Crowley stand up for himself and for Dean and he to have a good talk, but it makes no sense if you try to match it with the scheming, big pictureÂ Rowena of the earlier episodes. She has the information about Sam and Dean and the Men of Letters, and she doesn’t use it to try and convince Crowley to turn? She finally has a weapon to use, and she just keeps it holstered. I just don’t get it.

But, I will say, this episode was incredibly exciting. There was a lot movement, more so than I think I’ve seen this season. The Mark Of Cain stuff jumped forward a lot with the capture of Metatron and the theft of his grace (that was super cool, by the way). Bobby made a reappearance, though he’s kinda left in a bad spot now. Can Heaven send souls to Hell for breaking the rules? Regardless, he’s gonna pay. I really, really liked the Dean/Crowley stuff; that’s the first time the Winchesters have acknowledged Crowley in anything but a negative way (it doesn’t really make much sense that suddenly Dean and Crowley are cool, but okay).

It’ll be interesting to see what Rowena does moving forward. The coven is out of her way, she’s now got Hell mad at her, plus the two best hunters that have ever lived. She’s gonna make a move to get the spells that reside in the Men of Letters bunker, and that’s gonna hopefully be pretty awesome.

Curtis Armstrong, once again, murders his work as Metatron. I think that he’s doing the best work of anyone on the show. That’s not a shot at anyone, because I don’t think you can go through that cast and find bad work, but right now he’s playing in a different league.

So, to summarize: a good, fun, plot-heavy episode that, from a character perspective, is a little bit incoherent if you look too closely. Kind of like this review, actually. See, now you can’ t say mean things because I said them first.

– I miss Bobby, and Ellen, and Jo, and everyone else we’ve lost along the way.