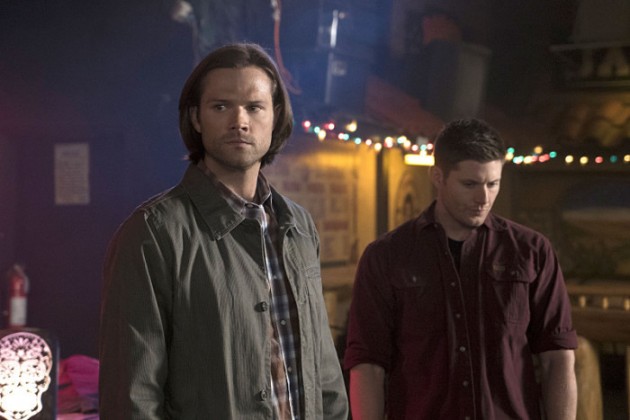 I’m of two minds on this tenth season finale ofÂ Supernatural. On the one hand, there is a lot of cool plot threads being dangled about, and it’s hard not to be excited about a few of them. But on the other hand, I’ve seen this movie before: Winchesters choose one another over the greater good, and all hell breaks loose. It gets harder and harder each time to take seriously this incredibly frightening threats when you it keeps happening.

Also, for the first time, I didn’t actually believe the brothers would be this selfish. This felt like writerly intervention. This felt like they needed them to choose each other so that certain things would happen. I know, that’s a ridiculous statement; that’s entirely what plot is, putting people in specific situations to make other situations happen. Perhaps I’ve just seen it happen so often that I’m no longer buying into it like I did in the past.

One of the things that bothers me the most is how the cool stuff we’re supposed to look forward to wasn’t really discussed at all during the season itself. The Mark being revealed as an elaborate lock and key isn’t a bad plot twist; in fact, the revelation that God less made the world and universe and instead took it from some amorphous evil is actually pretty cool. But for most of the season, the boys just ran around like chickens with their heads cut off trying to find a way to remove The Mark. There was no set up at all for this specific conflict; the danger of the Book Of The Damned turned out to be totally harmless and instead the evil effects came from a different place. One could argue, I suppose, that that was the point; the boys had no idea what they were dealing with, and acted accordingly. But, really? That’s the storyline?

It’s so hard for me to believe that the Winchesters would allow this to happen. Sam knows that Rowena and Cas are working on the spell, and yet when he gives in he makes no mention to Death about, you know, maybe stopping them? And the idea that Sam would literally let the world be consumed is totally ridiculous. I know it’s become fashionable to play ‘pin the blame’ on Sammy, but that dude spent thousands of years being tortured in Lucifer’s Cage, so I know he wouldn’t wish that on the world. Not only is The Darkness coming, but Death is dead! He’s dead! This dude has the list of people who are supposed to die, and he’s dead! Even if they can beat The Darkness, they’ve literally changed the fundamental dynamic of the way the world works. I’m sure they’ll find some way to explain it, but that’s a pretty big deal.

But, I gotta say, I am super excited for The Darkness. Though the name is a bit universal and boring, the concept is not. The special effects in this episode were so amazing, too, and were easily the best I’ve ever seenÂ SupernaturalÂ do. It wasn’t just the visual side, either; it was the sounds that came with it. The red lightning that released The Darkness has this screechy, screaming quality to it, and The Darkness itself sounded like rolling, angry ocean waves. It was really something else. Watching that black cloud come for and eventually consume the Impala was legitimately exciting and unnerving, and for the first time in a long time, I felt as if the boys were in a situation that wasn’t so easily resolved.

Overall, I think I’d give a B to this season. They had a lot of cool stuff going on, but it all felt disparate. I wanted more cohesion of ideas, plots, and characters. I would also like to stop the Sam Winchester character assassination and allow him a chance to breath. I would also like clarification on whether that was actually Dean Winchester under the influence of The Mark, because last I checked The Mark made you hyper-aggressive like an animal, not a slut-shaming douchebag. Dean wasn’t a demon when he made those comments, so I’m a little confused.

Hopefully, The Darkness lives up to my already-high hopes and we get a really excellent eleventh season ofÂ Supernatural. Or, it could get bogged down in the execution of so many massive and far-reaching plot threads, and lose grip of many of the storylines, like what happened this season. I would also like a healthy main cast dose of Rowena, who was the best and most interesting part of this solid season of television. Ruth Connell was amazing, and played her part with nuance and menace. I really hope she sticks around for a while.

I hope y’all liked the season, and I hope to see you when the show resumes this fall.

– Interesting how The Mark manifested in this instance (this goes back to what I said before) as abuse towards women instead of hyper-aggressive animalism.