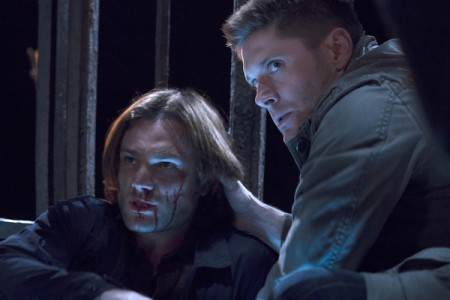 Five years (or so) ago on Supernatural,Â Sam Winchester went to Hell. He drug Lucifer, Michael, and Adam with him; in doing so, he ended the greatest threat that the world had ever known. He saved his brother, he saved his uncle, he saved the world. Sam was willing to go through unending torment so that the world could be saved.

But he’s not that man anymore. He hasn’t been in a long time. Lucifer, as full of crap as he is and as self-serving as he is, is correct. Sam has gone soft. But it’s not the kind of soft that leads to happiness; it’s not the mellowing of old age. It’s that softness that results in flabbiness— it’s a desk job that pays more, keeps the status quo, and drives you insane.

Sam has been drowning in guilt since Season 7. He’s trying to prove that he loves his brother, and that he wouldn’t be able to live without him, just as Dean couldn’t without him. But Sam can live without his brother— if John Winchester doesn’t go missing, and Dean never comes to the dorm room, Sam is living as a lawyer, and the world is totally different. Sam could’ve lived his life without Dean, and with Amelia, and that would’ve been fine by him.

Castiel said yes, because Castiel is always trying to help, and make things better. Castiel, for all his talk about free will, is just the same as any other angel— he always looks for a larger authority to save them. The angel Ambriel told him that he was expendable, and she was right (just as Lucifer was about Sam). He’s expendable not because Sam and Dean are the “real heroes”, or whatever. Castiel is expendable because he never picks a side. Castiel has one foot in both worlds, and as such as he can never truly devote the time to fix either one.

But he isn’t expendable now. Unlike the Leviathans, he’s allowed this great force to take over his body. He’s made a conscious, rational choice to save the world. He thinks that he’s made the right choice, finally— that Lucifer being free and his possible death are worth the cost. But that desire has blinded Castiel to the truth that SamÂ already knows: Lucifer will destroy everything too.

It’s not surprising, from the perspective of the SupernaturalÂ universe or the production of said show. Rowena had grown more and more powerful, and with her ability to pop Lucifer in and out of the Cage at will and the Witch Catcher around her neck, she was a super weapon that could be fired over and over again. The fact that Rowena never saw herself as a threat to Lucifer is surprising, but also isn’t— she’s looking for a higher power to protect herself, just as Crowley did with Amara. She tried to make a deal with the Devil (his freedom for her safety), and paid the price. It’s also a good indication of what Lucifer’s true motives are. If he was really into killing The Darkness and then moving “to LA [to] solve crimes” (a lovely potentialÂ AngelÂ reference), he would’ve kept Rowena around so that he could use her myriad skills in the fight.

But he snapped her neck, because Lucifer wants to be on Earth. He’ll destroy it this time, and he won’t make the same mistake twice. There will be no Horsemen— there will be no grand battle, finale, and showdown. He’ll just do the damn thing, which is what he should’ve done all those years ago. There are no more rules anymore; no more destinies to fulfill. It’s Lucifer v. Amara, and once that’s over, the victor will inherit the Earth.

And then burn it to a crisp.

SupernaturalÂ is having a resurgent season. This is the best run of episodes that it’s had since Season 5, and it’s not particularly close. The show has a sense of purpose, and drive. There isn’t as much aimless wandering, or MacGuffin type things like The Mark. There is an underlying message here that is pointing us down a specific path. Since Dean came back from Purgatory, it’s been the same beats with the Winchesters, with no real development in site. It was always about the brothers-over-all, and the co-dependcy of the two. The issue was always punted, always kicked down the road, to be examined for another time. It was the most frustrating thing about Supernatural.

I’ve always seen it as the degradation of Sam Winchester. I firmly believe that his character was shunted off to the side in favor of Dean’s continued character growth, and his relationship with Castiel (to a lesser degree).Â SupernaturalÂ became theÂ Dean Experiences Loss, Makes A Huge MistakeÂ show, and it wore on me. Dean talking Sam out of finishing the Trials was the biggest mistake the show ever made, because while it was dramatic and revealing and moving, it also totally undercut who Sam was. Sam threw himself into the Cage. He wasn’t pushed. Sam would’ve never done that.

But now, it’s interesting, because it’s not about Dean’s pain or whatever; it’s about Sam, as it always should’ve been. We finally get confirmation that Sam actually has lost his fastball, instead of it just being a production issue. It has real weight, is what these rambling paragraphs are trying to say. Sam matters, and his pain matters.

Sam may not have the literal power to defeat The Darkness, but he will be the one to defeat it. It won’t be Dean, because Dean would let it all burn down around them before he would ever put Sam in danger. But Sam, I think, has crossed that line. That flabbiness, brought up by the gorging on self-loathing, fear, and guilt, has been stripped away. Sam Winchester will try to stop The Darkness, and he’ll possibly die because of it. He’ll watch everyone die, and he’ll make the right choice, when that time comes.

It’s time for someone to be a hero.

Sam takes on Lucifer, while Castiel looks for Amara, and Dean tries to rescue Sam.