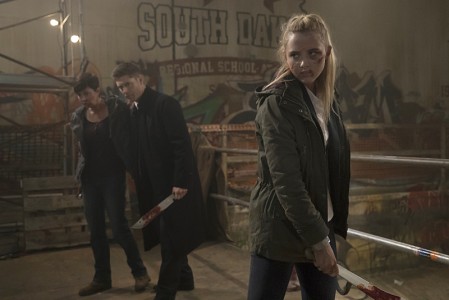 Tonight’sÂ SupernaturalÂ was full of characters we hadn’t seen in a while. Jody, Alex, and Claire all made their season 11 debuts, and turned an otherwise standard filler episode into something worthwhile. We hadn’t yet seen them as a family yet, and when we do, it’s easy to see that things have changed. I don’t just mean in terms of the show’s universe, either; you can see that the both Kathryn Love Newton (Claire) and Katherine Ramdeen (Alex) have grown as actors. Neither have ever been bad, but both were inexperienced, and it showed. If you were to wipe my memory of the two, and then show me clips of them when they first appeared onÂ SupernaturalÂ versus this episode, I wouldn’t believe they were by the same people.

I want to give a special shoutout to Newton, who had a lot to do in this episode, and carried it well. She’s got a swagger about her that means that she fits in best with Jared Padalecki and Jensen Ackles; she is strongest when acting alongside them. Too often the show gives her bad dialogue; they try too hard to make her seem like a rebellious teenager and it falls flat. They don’t have to back off her characterization, which is interesting, but they could do it in less dialogue-expelcit ways.

Stefan Pleszczynski directed tonight’s episode, and it was a weird one. All TV shows have what you could call a “house style”; a very specific atmosphere and lighting and music, etc. The goal is to make sure the show is internally consistent; you don’t want it to be super colo-drenched and dark one week and then come back with the exact opposite. So, when a director comes into an episode, they can and should bring their style to the show, but also adhere to the already-established atmosphere.

This episode did not.

I don’t even think that was a bad thing, to be honest. It was jarring, because you get used to certain rhythms. There was a moment where a big plot reversal occurred, and the villain says something clever, and then it cuts immediately to commercial. All of that happened according to plan, except instead of cutting to commercial, it pulled back into a wide shot of the entire set and held it for a few seconds. It was one of the most bizarre things I’ve ever seen onÂ Supernatural. That was 100% different than normal. A lot of shots lingering on subjects in ways that it doesn’t usually, as well; the dinner scene, where Sam and Dean chow down and try not to speak when Jody is admonishing Alex, lasts about ten seconds too long.

Having said that, I liked it a lot.Â SupernaturalÂ has been on the air since I was in the eighth grade, and things start to stagnate after a well. The best episode of the season, and probably of the last six years, was “Baby”, which totally stripped television convention andÂ SupernaturalÂ convention in it’s depiction. Pleszczynski went a little overboard, in my opinion, with the changes, but they were also welcome.

The writing tonight, on a macro level, was excellent. The idea of Alex’s past coming back to haunt her, and dealing with the aftermath of this hastily formed family, is fascinating stuff. But on the individual level, it stumbles. There are long stretches where everything just stops working; the end scene in particular, where Sam and Dean and Alex and Claire all chat is pretty bad. There are also lines of dialogue (one spoken by Alex in particular) that would never be spoken aloud by a real human being. Things just lasted too long as well: the opening scene where Claire holds a sword to his throat drags, and could be five seconds shorter and be the better for it.

I also thought that Jody Mills didn’t have enough to do. Kim Rhodes is one of the best actresses to ever be brought ontoÂ Supernatural; she turns a well-written character into one of the best that the show has ever had. I know that a lot of this episode was focused on Claire and Alex, and rightfully so; and Jody did get some juicy moments. But this episode needed more of her presence. She is both a maternal and an empathic peer to Sam and Dean, and that is an invaluable character to have.

It’ll be interesting going forward to see how much more they do with these characters. With as much ground to cover in any given season, it can be hard to find space for these characters to breathe. But any time we can get away from the boys a little bit, it enhances rather than detracts. Sam and Dean are who they are, eleven years in, and a focus on some less explored territory can be a good thing.

Claire, Alex, and Jody team up with Sam and Dean when a monster starts killing in South Dakota.