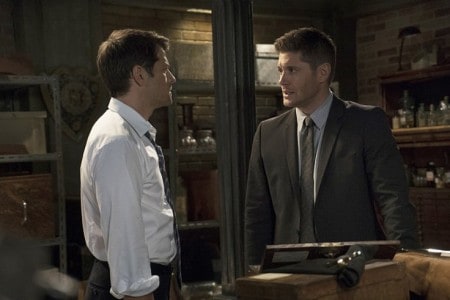 In tonight’sÂ Supernatural, Lucifer and Dean had a conversation. It was normal, unforced, and without awkwardness. He fooled Dean, for the moment, even as Dean expressed reservations to Sam later on. But what was most striking was the look on Lucifer’s face as Dean walked away. It wasn’t sly satisfaction, or contentment, or joy; no, it was gleeful. Like a child who had stolen a piece of candy and blamed it on his brother. His smile stretched the entirety of his face. His lips were pulled back. His eyes gleamed in the dim light.

That’s the danger that Sam saw. It’s not that Lucifer has the power to destroy the Earth that makes him so dangerous; Cas and the Winchesters have faced down threats of that magnitude, including Lucifer once before, and came away victorious. The reason that Sam was willing to risk the destruction of the whole world at the hands of Amara is because Amara is not psychopathic. Amara doesn’t destroy because she enjoys it; she’s on a revenge mission, to get back at the brother that locked her in a cage, so that He could build the world and the universe and everything in between.

A comparable (maybe the only comparable) character is the Joker. He’s not in it for money, or blood, or anything but his own amusement. He’ll burn a pile of cash and blow up a hospital because that’s what gets him going in the morning. Lucifer may claim that his evil is directed by plans; that his goals are black and white, in prophetic pen and paper, but it’s not true. He got locked up in the Cage by three humans and a lower-tier angel; he got locked up by Sam Winchester, who swallowed him hole and filled up the abyss. Lucifer is not destiny, or prophecy, or fate—no, Lucifer isÂ choice. Lucifer chooses to come out of the Cage to beat the Darkness back into her prison, and Lucifer chooses to burn the world to a crisp. He’s not like Amara, who was wronged; Lucifer chose to try and murder humanity, with no provocation. He preys on the vulnerable.

A baby loses her parents; never gets to meet them, never gets to laugh with them. She’s damaged by the beast that took them away, left with a handicap that she’s always had to overcome. She builds her life on the idea of revenge, and all for people that she never knew.

Sam, for all of the years that John Winchester would live, never met his father. Whatever John Winchester was as a parent died with his wife. Sam, infected with demon’s blood, always a cog in a larger, grander machine. He swore revenge for people he never knew, in service of his brother, who did.Â It’s no surprise that Sam and EileenÂ connected in the way that they did.

EileenÂ being deaf, and yet being a hunter, was an excellent choice by theÂ SupernaturalÂ staff. This world has been to small, for too long, when it came to the human side. Too many perfect hunters, who flitted in and out of the scenery, with little to show for it. But to show someone with a disability, with a tragic past, speaks to a broader, more inclusive, moreÂ interestingÂ world.

The demons and the angels and the banshees are cool, but the humans are the most important part ofÂ Supernatural. It’s the drama between the characters that ultimately brings us back, not the mythology. How many times can we hear about wars of the paranormal before we lose interest?

Mildred’s inclusion was also a wonderful choice. Though her cougar-ness was leaned too hard upon, what the character and actress brought to the narrative was a breath of fresh air. It was a mother figure, finally, with real power and agency, telling Dean to stop and smell the roses every once in a while. Mildred was prepared to die in service of fighting the banshee, but she didn’t want to, and that’s the key. Dean is prepared to die in service of killing Amara, but rarely does he ever wonder if he actually wants to. If Dean wants to be ripped apart and die fighting ultimate evil, that’s fine; but if he wants to live, actually live, then he needs to be honest with himself.

I am struck by Eileen, even as I try and think about other things.

I am struck by the joy that I felt in seeing a hunter with a disability inÂ Supernatural; a sort of uplifting hope that enhanced this episode past what it really gave. It’s pathetic; not on the part of the show, or on my part, but on the part of the society that I live and breathe in. That I find so much overriding joy at the thought of those with handicaps being included in a major television show makes me angry. It’sÂ OutlanderÂ all over again; how sad it is that I am reveling in the idea of inclusivityÂ in the year 2016.

Will EileenÂ reappear again? I don’t know. If I had to guess, I’d say no.Â Supernatural, for all it’s ability to find new storylines and execute them well enough, season after season, it is undoubtedly coming to an end. If this were two season ago, I would think that she would show up for another guest appearance, as a sort of Sheriff Mills-type, but it might be too late in the run for that.

But if I may suggest: a spin-off, for Eileen, and as I think about it, Mildred.

Here’s my argument: why not? The adventures of EileenÂ and Mildred cannot be any worse thanÂ Bloodlines, a total misfire, misread, and misunderstanding of theÂ SupernaturalÂ universe. Why not take this two TV-aytpical characters, and explore the world? Even if Sam and Dean light up The Darkness and stuff the rabbit back in his box, monsters will still roam the countryside. Hell, team them up with Sheriff Mills and Sheriff Donna; turn it into a detective agency.

Do something with those characters. Don’t let these charismatic, wonderful women of this universe languish in guest star status. Don’t let characters that speak to something more than the boys club that it’s occasionally become fade away.

DeanÂ cannot sleep, and he sits at the edge of the bed, staring into the darkness.

Sam and Dean meet a new hunter and fight off a banshee, while Cas tries to find more information on The Darkness.