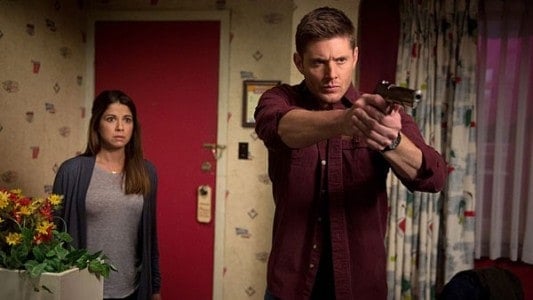 A commonÂ SupernaturalÂ complaint, amongst both the fan and critic communities is thatÂ the show manufactures Winchester drama; that is, they pit the brothers against each other through secrets or some other thing. The Winchesters have always had drama between them, but it’s really ratcheted up since the sixth season.

The issue is that these characters have grown and evolved and stretched so much, that it’s truly unbelievable that they would ever hide things from one another. They’ve seen the consequences of their lies, and should know better.

But often times, they don’t. They still hide things, until the very last moment before all hell breaks loose. It can be very frustrating.

Tonight, however, for the first time in maybe six years, the Winchesters stopped hiding things. Dean openly told Sam, with no provocation or pushing, that Amara was the woman who showed up as his deepest, darkest desire. Had this been another season, Dean would’ve taken it on the chin alone. But he tells Sam, even though he’s terrified that Sam will think less of him.

But Sam doesn’t. Sam supports him, and always has. He tells him that he’s not going to judge him; most importantly, he asks Dean if he thought he “ever had a choice in the matter.” Dean’s greatest fears all revolve around Sam, and for Sam to support him with equivocation or conditions means a great deal.

This was not the typicalÂ SupernaturalÂ episode. The level of camp was near zero, as they played almost everything totally straight. There was a grossness to the Stacy/Dan scenes; there were no positive indicators, nor was it played like a joke. Nor was Melissa telling Sam and Dean that she is the one who cast the spell. There is a lot of room for hysterics and drama and slapstick comedy, but the show refrained. Her escape from her husband was a little odd, with how long she backed up for, but otherwise it was very visceral, and real, and unsettling.

You also can’t discount the end, where Sam kills a human being. Yes, she is a witch who kills people, but she is not a monster. Sam shot and killed her, and her blood pooled under her cooling body, and that was it. Sam and Dean have gone to greater lengths to protect much less, and to see Sam near-casually shoot that woman in the back was deeply disconcerting.

The whole episode was shot so eerily. Lots of dark colors, and low lighting, and straightforward, all the way to the end. This was not a complicated episode, and that was a benefit in one that had more than oneÂ opportunity to get very convoluted.

This was a very good filler episode; it both kept us entertained but also moved the plot along in a meaningful way. But there really isn’t much to say about it; it was well-made, and well-written, and well-performed. But it was on train tracks the whole time, speeding towards the conclusion. It followed a tried and trueÂ SupernaturalÂ story, and succeeded on that merit. That speaks very highly of the infrastructure thatÂ SupernaturalÂ has built.

Sam and Dean take on a monster that rips out the hearts of it’s victims on a Valentine Day-adjacent episode of Supernatural.