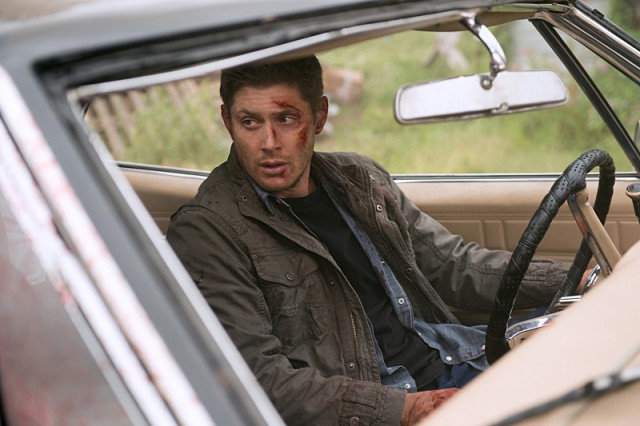 Sleepovers in small rooms. Boys too scared to sleep next to each other, so they sleep head to toe. It’s the same for the Winchester brothers on Supernatural; separated by the back and front seat, they still sleep head to toe. But it’s not to be further away from each other, but so that when the sun rises and they open their eyes, the first thing they see in that new morning is each other.

There is a lot of talk about the best television being like the movies: swooping direction, expansive themes, emotional heartache. But TV is better than film, because film cannot be about the minutiae; it doesn’t have the time. The best directors can wring it out of two hours, or two and a half; but television has the time, and it should always indulge the moments we leave on the editing room floor.

Tonight’s episode of Supernatural, told from the perspective of the Impala, explored the minutiae of the Winchesters. Eating, talking, sleeping next to one another; these are the things that are left out as we move, endlessly, onto plot point after plot point, character arc after character arc— it’s the stuff that matters most.

The big moments are all we see. The self-sacrifice, as Sam throws himself into the Cage. The love, as Dean kills Death to save Sam. We’re told that the Winchesters’ bond is stronger than anything else, and that they will do anything to save the other. But the big moments don’t create that bond, not a lasting one, anyways. It’s the little stuff. It’s the countless shared dinners and the sleeping in the car head to toe and the laughter over Sam “digging into the lore.” That is what creates a bond as a strong as iron, and for the first time in a long time (and maybe ever), we see Sam and Dean be brothers in the truest, realest, most regular sense of the word.

A ghoul-vampire crossbreed, turning humans so that they can have an army to buy some small measure of time. Alpha Donnelly knows that’s all he’s doing; his nineteen nock-zers have no shot at winning, and yet he moves forward. But they still kill one another, hunters and monsters; even when facing the greatest destructive force the world has ever seen, they still spill blood. It’s an easy justification to make, of course: everyone is going to die, so why not grab as big a slice of this crumbling pie while I can?

But it’s also not hard to see that if they were all to team up, they would buy much more time.

But, in the end, the Winchesters prevail, even as they sit bloodied and bruised; surrounded by broken glass and beaten metal, they drive away again. The Impala is an extension of the Winchesters— as it breaks, so do they, and vice versa. They live at the bunker, or a hotel room, but their home is always the car. They always keep moving.

It’s what keeps them alive, and what keeps them honest. They have nothing to return to, and having nothing to return from, and as such they are committed to the work they do. Sam longs for a relationship; not a marriage, not like what he had with Jess, but something more than what he had with Piper. Dean gets it, and always has; staying connected in that way makes you vulnerable, and it makes you take up roots, and it makes you want something more than you can possibly have. If they are to be hunters, they must be hunters. They can’t be family men, too. Dean saw it with Lisa and Ben. Sam saw it with Jess, but always wants to break the mold, not fit it in it; the irony of that, of course, is that the harder he tries to break it, the more he proves why he’s stuck in it.

The biggest strength of tonight’s episode was that it stripped away the typical TV fare. The camera shots were limited to just inside the car, and they were almost exclusively stationary. The music was gone, too; only the radio and ambient noise made up the soundtrack, something that probably hasn’t happened before, or at least not often. When we see it from the car, we literally see it from the car: unabridged, unvarnished, and unpolished. The brothers share their feelings, often awkwardly. They laugh at each other, reaching across the fear that is always pumping through their veins. Sometimes, they even listen to music.

The combat scenes tonight were as good as they’ve ever been. They were raw, and brutal, and without musical cue. This was aÂ SupernaturalÂ that felt like it was on HBO, or at least FX. It felt free of the what we expect of The CW and the campiness from all too often this show relies on. It felt like a different television show, almost like an alternate universe, where the visceral, gut-wrenching horror of the first two seasons stuck around, and softened gradually, instead of slipping away in the middle of the night.

I want more of thisÂ SupernaturalÂ so badly that I can barely stand it. I can barely stomach the idea that we will be back to borderline slapstick camp. This season has been excellent in the early going, but I want this. I want the show to start over and be this. I want the minimalism AND the lore. I want the brutality and the emotional minutiae. I want it all, and I am bitter and angry that I won’t get it.

Sam and Dean lie head to toe in the Impala, in Baby, and they sleep. Sam lies with his feet towards the audience, as if he were in a coffin. Dean lies with his head towards the audience, upside down. Sam wears red, and Dean wears blue. They are yin and yang in this scene; they are two sides of each other; they dream about the parentÂ they knew least and were so desperate to be like, but Sam is his father and Dean is his mother, and they will never escape that.