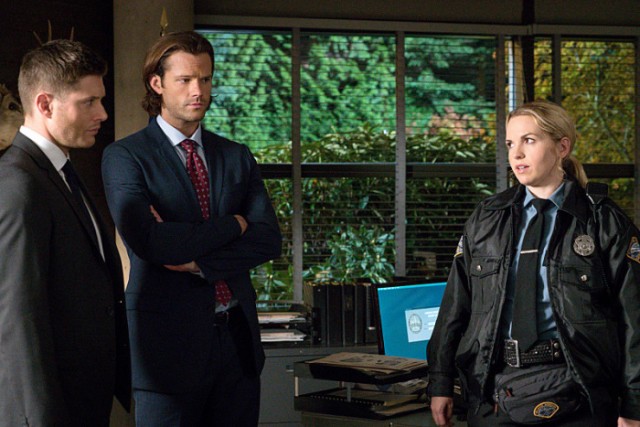 The last few weeks I’ve been listening to a lot of the StoryWonk podcasts. I started off with theÂ Star Wars grouping and then moved on to theÂ Buffy the Vampire Slayer/AngelÂ podcastÂ Dusted. Those podcasts are about exploring those shows and movies from a very story-centric angle; not so much if you enjoyed them (though that plays a factor), but if they work on a very basic, fundamental level of storytelling.

As you can imagine, that sort of thing has been on my mind lately. It’s not that I haven’t focused on the storytelling aspects ofÂ Supernatural, because I do. It’s more that I am able to separate my enjoyment of something versus the quality of it, at least to a certain degree.Â Having said that,Â I liked tonight’s episode, but I also think it sucked pretty hard.

Being a television director is not the same as being a film director. To be a television director is to share responsibility with the executive producer (or show runner) in the editing room; you don’t get to be Scorsese onÂ Good FellasÂ or Francis Ford Coppola onÂ The Godfather: Part II. You don’t get to put your individual mark on the show in a large way, is what I’m saying. Sure, you can tell when Michelle MacLaren directed an episode ofÂ Breaking Bad, but it’s still an episode ofÂ Breaking Bad. You don’t get to create a whole new thing, because it would create a tonally, thematically, and aesthetically inconsistent show.

But you do matter, and your style does bleed over, and the style of tonight’s episode ofÂ SupernaturalÂ was directed in such a way that made it feel like it wasn’t aÂ SupernaturalÂ episode at all. Tim Andrew has directed six episodes of the show since 2011, all of which are super strange, filler fare. I don’t mean that as an insult, or as a compliment; it’s just fact. But I don’t remember any of his episodes being this directorally strange.

One example: girl in the jester costume is asked who donated the costume. Before she can say the name, we get a hard cut to the front door of a house. Door opens, Dean says, “Rita Johnson.” We get the name from this interaction, instead of from the girl. What is the point of having the conversation with the girl then? You know that you have to establish that Sheriff Donna (welcome back, by the way!) is going to have to pretend that the person in the costume escaped to protect the innocent girl. So, have her say the name of the person who donated the costume. Cutting that off was just very, very strange for me.

There was more stuff that was strange and off-putting, of course, but I don’t want to spend anymore time on it. I want to talk about the writing of this episode too, because it was also very strange and dissonant.

The premise of ghost possession was interesting; I thought that the costumes were really creepy and had the desired effect. But the story around the costumes was super unfocused and seemed to have no point. Chester was murdered because they thought he was a child molester; Chester’s nephew Max thinks that Chester is a good person who was good to him. At the end of the episode, Max calls out to Chester and tells him to stop, but he doesn’t. Chester then dies. So, what was the point of even mentioning Max’s thoughts of his uncle being a good guy? It amounted to nothing. The whole ‘Chester as pedophile’ part of the story amounted to basically zero.

Also, the banter throughout the episode really sucked. I know there was supposed to be some on-purpose awkwardness, but none of it was funny or engaging. There were jokes clearly set up, but they didn’t land at all. All of the rabbit stuff was so so self-consciously trying to be funny in that specificÂ SupernaturalÂ way that it wasn’t funny at all.

Regardless, I was into it. There was a lot of interesting things that didn’t come to fruition, but that’s fine. It was filler, and it did what it needed to do. At the end, Sam and Dean talk about going back to Lucifer’s Cage, and shoot it down, but that’s not the end of that, obviously.

SupernaturalÂ is on a break until December 2nd. Hopefully, we get back into the more serialized plot then.