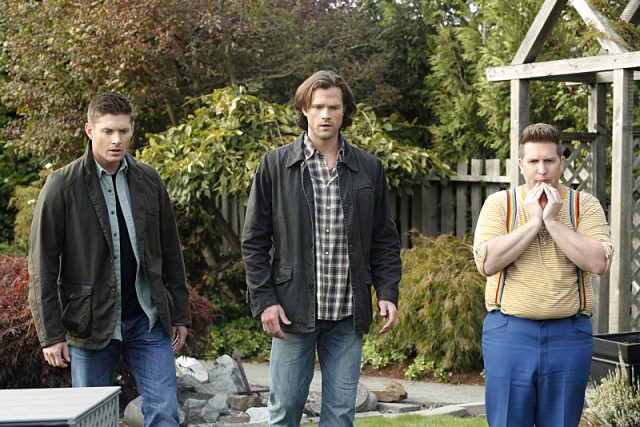 This week’s episode ofÂ SupernaturalÂ was directed by Richard Speight Jr., who many years ago played Gabriel on the show. I was glad to see him back, even as a director, because he has a really interesting sense of comedy and comedic timing. When I saw what this episode was going to be about, I thought that he was a perfect choice.Â I still feel that way. His direction of this episode was both unique and familiar, and really brought a lot to a episode that didn’t quite land what it was trying to do.

Who is Sam Winchester?

There’s always been a duality; a split in two, with both personalities warring for control. One half of Sam wants to get away from the violence, and the hunting, and settle down. The other half enjoys being with Dean, and the hunting, and protecting people. But it’s not a clean split. They are interwoven with one another; Sam’s desire to get away from the violence is directly rooted in his desire to protect people, and his love for Dean is tied up in his desire to settle down. As such, neither side ever wins, and as such, Sam never has any clarity on what he really wants.

Sully thinks that he was wrong about Sam; that Sam was right to choose the path of a hunter, because Sam is a hero. It’s hard to argue with Sully here. Without Sam and Dean, the world probably ends over and over again, with no one to protect it. Sam and Dean might’ve released Lucifer and The Darkness, sure, but they’ve also stopped other apocalypses that weren’t caused by them. That sounds like faint, damning praise, I know; and perhaps it is. But Sam-as-hunter has done a lot more good than Sam-as-academic ever would have.

But that doesn’t mean that Sam is happier as a hunter. It’s the life that he wants, and the life that he accepts, but there is always a sadness about him when he discusses his choice. We cannot forget that Sam was ready to die a few seasons ago; that only Dean tricking him into allowing a fallen angel to inhabit him and heal him kept him alive. I think, even though Sam may disagree, that there is still some small part of him that wants to get away from all this.

But the difference now is that Sam knows that the only way out is through. You can’t get away from killing monsters when there are still monsters to kill. If he wants to lock up The Darkness and right his wrong, he’s going to have to go back to the place that broke him.

Dean doesn’t like Sully, and he scoffs at the idea of imaginary friends. For the majority of this episode, he is very hostile to any and all Zanna that he comes into contact with. It’s not explored with much depth, but it’s clear that he resents the fact that Sam even needed an imaginary friend when he had Dean.

Dean has built his identity on the idea that he is Sam’s protector and that he is the only one who knows what’s good for him. But while that idea does have some merit, it’s also more than a little self-serving. Dean needs to be the protector, because that’s all he’s ever known. With Sully in the picture, there is real evidence that Sam was left alone and without Dean. Sully is a threat to the very core of Dean.Â Like I said, this wasn’t explored in-depth, but it’s a fascinating bit of character building and exploration.

Also: note how Sully treats Sam. There’s obviously a kindness to the way that Zanna treat all children, but it’s not a leap to imagine that they also tailor their response to the kid they are counseling. Sully is not prodding, or forceful; he is only attentive, and soft, and makes sure that Sam knows that he’s not going anywhere and will be back as soon as he can.

I’ll be honest: Sully’s attitude towards Sam struck a really powerful chord with me. I’ve said before how I relate to Sam and the struggles that he goes through, and to see that someone really understands the best way to talk to him made me a little emotional. Sam is a person who thinks that everything is his fault, and that he’s a burden, and that sometimes, when it’s dark outside, that he’s better off dead. Sully makes sure that Sam knows that he is coming back, and that he isn’t leaving because of Sam, and he makes sure that Sam is okay first and foremost. Dean is a good brother, and a good person, but he’s too much like John. He’s too hard-nosed and too aggressive. Sully is soft, and that is what Sam needs when he’s contemplating the decision to throw himself back into the Cage. Sam needs to be told that he is good, and smart, and right, and that going into the Cage doesn’t mean that he deserves to be there, but that he’s a hero, and that’s what heroes do.

I have my issues with this episode of Supernatural. The most interesting parts of “Just My Imagination” are mostly sub-textual, and require too much outside thought to come to a conclusion. That isn’t to say that SupernaturalÂ should’ve been more on the nose about it— rather, the series should’ve been just a little more explicit. Dean’s monologue at the end was a good start, but it felt like it came out of nowhere.

But I thoroughly enjoyed the Sully character, and in a world and mythology that is so bleak and so dark, it’s nice to be reminded that some magical creatures really do want to help those in need. It’s nice to know that the grimness of Sam and Dean’s adventures are not for naught; that they are fighting for something more.

It’s a good reminder for the rest of the world, too. With all the violence and destruction and pain that we’re seeing on a daily basis, it’s nice to be reminded that there are things worth fighting for.