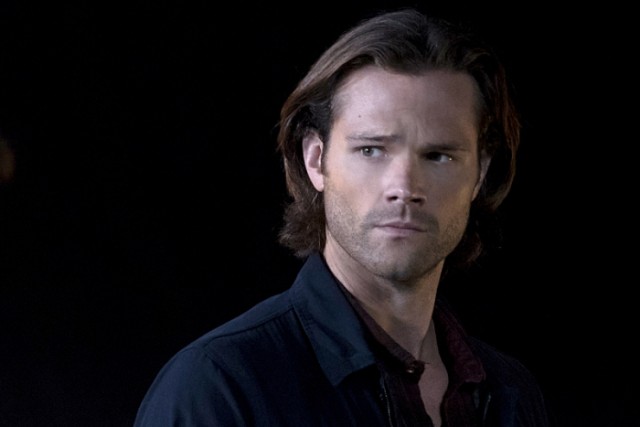 Of course it was Lucifer who gave Sam the visions. It seems so obvious in retrospect. And perhaps the opposition to that idea was driven by wishful thinking. There was a level of desire for God to have returned to the fold; that the most powerful being in the universe, and the mommy and daddy of all living things, would not just stand by and let the few destroy the many.

But of course he is.

He always has. That’s what he does. God is an absent father, too overwhelmed by the scope of his creation to handle his business. God created the universe— the stars, and french fries, and golden retrievers, and the rings of Saturn. He pulled into life beings like Lucifer and the Leviathans, and locked up the only other force in the entirety of existence who could stop or counsel him. And he always runs. God has always ran. He messes something up, and he puts it in a Cage. He messes something up, and he locks it away. He buries everything as deep as he possibly can, deep enough that only under the most extreme and specific of circumstances would allow those evil things to resurface.

But here’s the thing: he knew that they would resurface. He is omniscient; “because from the moment Dad flipped on the lights around here,” he knew what he had wrought.

(This kind of thinking opens an interesting line of questions, too— if the rest of the universe is on a set timeline, seeable in it’s entirety only by God himself, does that mean that God is a part of that set timeline as well? Did he create the Leviathans knowing what they would eventually do, but have no choice in the matter but to create them?)

If you believe that God is outside the set timeline, then there is but one unavoidable conclusion: he knew, from the moment he drug those being into the world, that they would be evil, and wreak havoc on the world. He is literally the only person who can stop them. Sam and Dean can stuff as many things into as many boxes or dimensions or whatever the hell as they wish, but that isn’t ending them. When they fought Osiris, they knew that they would only contain him for a few thousand years. But that is not a special case. That is every Big Bad they have ever come across. They never win; they just… delay.

God would never speak to Sam Winchester because God has never spoken to anyone. God didn’t speak to Gabriel, or Lucifer, or Michael. When God left, he left. He saved the Winchesters from the rising of Lucifer; he brought Castiel back to life after Lucifer ripped him apart; he did these things not because he wanted to save the world, but because he wanted someone else to do it for him. Rescuing two firemen from a burning building so that they can put out the fire you set elsewhere is not heroic, or Godlike, or even a little bit noble; it’s cowardice, plain and simple.

He speaks through Joshua? That’s BS. He uses Joshua as a way to massage his own ego, and sate the masses. You see that attitude in the priest in the church; they have never seen God, and all they have that connects them to him is the Bible, and yet they worship him wholeheartedly. God has never done a thing for them except to allow them to be maimed and killed. Billions upon billions have murdered and fought, protected and donated, all in “His” name, and they get no response.

Daddy is never home. When Amara says there was no Daddy, it’s more revealing than she could ever understand. There is never any Daddy in theÂ SupernaturalÂ universe, and that’s the problem. Half of the equation never keeps up their end of the bargain. They’re always leaving behind those who they created, and who they swore they would protect.

And so Amara comes bursting forth, like water behind a begging, broken dam, and tears through the world. She is evil, and violent, and so, so young. So inexperienced. So unthinking. She tries to get her brother’s attention by hurting the things he supposedly loves, and gets no reply. She prays to him, and gets no reply. She will murder Heaven, and Hell, and burn Earth until it’s another lifeless rock in the expanse of space and time, and will still get no reply. If God would just show up. If God would just showÂ up.

SupernaturalÂ has always been a show about breaking away from destiny and making your own path. It doesn’t matter what it was; the Winchesters and their crew always managed to overcome whatever higher powers put in their path. They averted not a apocalypse, but the apocalypse— Lucifer and Michael, rising from the dirt and descending from the sky, both stymied by the world they would carelessly destroy. That has been the driving force, both conscious and subconscious, behind the Winchesters and their crew. Once you have stopped Lucifer himself, no matter what, you think you can do anything.

Maybe the greatest long con in television history, Supernatural. We’ve been told that we were being given one story, but the subtext says different. All of the problems that the Winchesters have faced, they have buried, but never destroyed. They’ve been running for so long, and in the same direction, that they’ve forgotten what it means to actually score a victory. It’s been one setback after another; one close shave after another; one last-second reprieve after another.

They have none of that left now. Death allowed them to die and come back, for reasons that we’ll never understand. God resurrected them on his own, and put them in the right places on occasions, but even that infrequent assistance has disappeared. The Winchesters were forced to turn to demons and witches, and Sam is paying the price. There are no more chances.

Sam may escape the Cage, and I imagine he will; but he’ll be different, one way or another. Dean is faced with an Omega-level superpower, and he can do nothing to stop it, or even hope to contain it. Who even knows what Cas or Crowley or Rowena can do, if anything at all.

Lucifer told Dean that they would always end up here: Lucifer free, and Dean being unable to stop him. Every event has been another step towards this eventuality. I suspect that Lucifer will stop The Darkness, or harness it somehow, and that Dean will have no recourse. I predict that Amara will destroy the angels, and Hell, and that the only thing left will be scattered bands of humans, and that Dean will organize them. He’ll become cold, and distant, and a villain of his own story; he’ll be forced to fight Lucifer, and he’ll lose.

No matter what they do, they’ll always end up here.