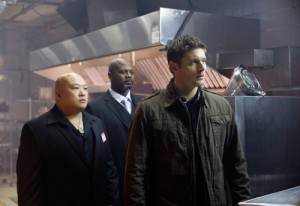 It’s always difficult to do a standalone funnier episode after a huge mythology episode, but Supernatural seems to enjoy doing this. Normally I don’t mind, but some people don’t like it. Have no fear, people, because tonight’s episode went a long way in advancing the mythology. With only a few episodes left until the end of season 5 – and until the culmination of the apocalypse storyline – the writers aren’t wasting too much time.

After losing Cas and Adam, screwing Michael on a technicality, and killing Zachariah, Sam and Dean are off searching for other ways to kill the devil when they’re caught in a freak storm and forced to take shelter in a swanky hotel for the night.

Dean’s renewed determination from the end of the last episode has not dimmed. In fact, he’s nearly back to the funny, awesome, pie-loving Dean that many of us have missed. An early conversation between him and Sam reveal that Dean is confident that they’re going ot find a way to kill Lucifer (insomuch as he tells Sam anyways) and is back to the loving, concerned big brother – wanting to make sure Sam rests up so they’re prepared to give their all in a fight.

They soon become aware that the nice, art deco pit stop is actually a meeting place for a group of pagan gods – including Kali, Odin, and Ganesh, among others. The gods have gathered to figure out how to stop God, the angels and Lucifer from destroying the world. Because, according to Kali, they were here first, and they’re not too happy that some petty angelic family squabble is threatening to destroy the world that they’re so fond of. 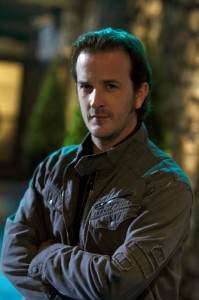 Can We Talk About the Elephant in the Room, Please?

Seasons 4 and 5 have been dominated by the Judeo-Christian religion. We have see pagan gods in this show before – most notably in the Christmas episode back in season 3 – but their appearance has been sparse. I guess it was about time we learned that they, like many humans, are not too happy about God and his angels getting involved in a pissing contest that threatens to destroy the world. And so they have lured the Winchesters to the hotel in order to figure out how they can use them to stop the apocalypse.

Enter Gabriel, who has successfully managed to hide his archangel status while he played the pagan god Loki. Apparently he and a Kali had a thing and she knows his real identity, but that’s not revealed until later when he attempts to seduce her in an attempt to end the blood spell she has over Sam and Dean, thereby allowing them to escape from the hotel. Gabriel fails in his first attempt and Kali stabs him with an angel sword. Fortunately, because he’s a tricky fellow, he managed to switch in a ringer for the sword and escape death.

One scene in the middle of the episode gave me pause. The brothers caught some of the gods’minions about to chop up a person for food. The boys hid, but Dean clearly wanted to rush in and save the poor guy. Sam held him back, basically telling him it was too late. This is the Sam from seasons 3 and 4. Dean is always the one who needs to act – to save, if possible. Maybe Sam is the more level-headed one, and maybe it would have been a bad idea to interrupt the minions during their decapitation, but it’s still shocking to see Sam losing his moral compass, if only for a moment.

Once Sam and Dean basically realize that they are screwed because they believe Gabriel is now dead and they have no viable way out of this mess, Dean agrees to team up with the gods in order to take down Lucifer. The gods agree to let all of the other people (read: meals) go and Dean manages to discover that Gabriel is still alive and hiding outside. When Dean tells Gabriel his plan to help the gods kill the devil, Gabriel balks.

What’s interesting during this exchange, is that Dean is essentially asking Gabriel to kill his own brother (Lucifer). He seems disappointed when Gabriel says he can’t do it. Does this seem hypocritical of Dean? Dean has never been able to kill Sam, no matter how evil he’s gone. During the last episode he only talked about killing Sam if Sam became Lucifer’s vessel. Why hold the angels to a higher standard than you hold yourself, Dean?