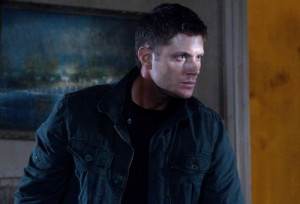 What the hell is the matter with Sam?

He’s gone way past white lies and lies by omission. This is worse than keeping Ruby a secret or even drinking demon blood. Now he’s deliberately allowing Dean to be killed and turned into a vampire for…what? To gain information on the Alpha Vampire?

I have no freaking clue. But I don’t like it. Not one bit.

I’m jumping ahead of myself though.

‘You Think You Know Me…But You Don’t’

We open with the most ridiculous scenario in recent pop culture existence. A vampire (Robert) meets a young, naive girl (Kristen) in a club. She’s all ‘oh, you’re so dreamy….and dangerous, but I love it and you!’and he’s all ‘you should stay away from me for your own good…I vant to suck your blood, muahaha….but, wait, I may love you too, so I won’t’.

God, seriously, who falls for that crap?

As it turns out, the Edward Cullen clone isn’t as wholesome as his Twilight counterpart and he lures the girl to his master vampire, Boris (who has an extremely bad perm), to feed from and eventually turn. 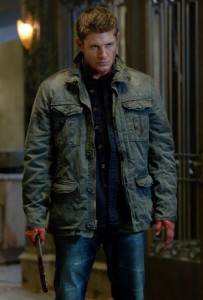 “He’s Watching Her Sleep. How is that Not Rapey?’

Sam and Dean are on the case of the missing girls in town, because Kristen’s not the first. They investigate her room, which is a shrine to all things teenage vampires. It made my eyes want to bleed. I remember hanging posters from Tiger Beat in my bedroom as a young girl, but I never took things that far. The boys discover Kristen was going to meet someone at a club. They head to the club and split up, trying to follow two potential vampires. Sam manages to behead one, but the one Dean is following is just a fake.

Until he comes across Boris, who throws him around. Sam rushes out into the alley and…stops. He stands there and watches while Boris pushes his blood down Dean’s throat and turns him. And he smiles.

It’s the creepiest moment this show has ever had.

Shortly after, the boys are holed up inside a hotel room, where Dean’s newfound vampire senses make every sight and sound heightened. He reveals he called Samuel, because he doesn’t think Sam will be able to kill him. He’s a monster now and doesn’t want to hurt anyone. He’s also curious as to why Sam’s not freaking out.

Dean manages to escape and run to Lisa’s (who he was supposed to go visit in a few days). He tells her he can’t bring his life home to her anymore, that he’s too dangerous. It’s infinitely less cheesy than the Rob and Kristen scene (because there’s a way to play dangerous vampire and helpless girl that won’t make people cringe, FYI). He pushes her against a wall, smacks Ben around too, and flees the house. 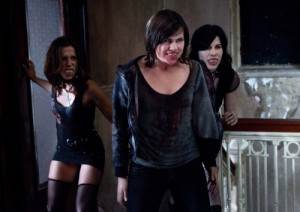 ‘It’d Be Almost Like You Let Him Get Turned’

The Winchesters and their grandfather all reunite back at the motel, where Samuel reveals that he knows a spell that will turn Dean into a human again. But there’s a glitch – he needs the blood of the vampire that changed him. And he absolutely cannot drink a drop of human blood beforehand or the spell won’t work. Dean goes off to find the vampire nest and Sam remains behind, where Samuel confronts him – saying he knew about the spell – and asks whether he deliberately let Dean become a vampire so he could get to the Alpha.

Uh, yeah. He totally did.

At the nest, Dean discovers that Boris is taking orders from the Alpha Vampire to build up an army (and he is definitely not afraid of hunters anymore). He changes cute boys to recruit and turn cute girls, who then go out and recruit and turn cute boys again and the cycle continues. When Dean attempts to inject Boris with dead man’s blood in order to steal some of his a drop spills, making Boris aware that something is going on. He grabs Dean and goes to kill him, but not before the Alpha somehow mind controls all of the vampires – including Dean – into passing out. Dean gets some weird flashes while he’s under and when he comes to, all of the vampires in the nest go after him.

What follows is a blood bath – complete with a lot of decapitated bodies. It’s gross. Dean and Boris square off and, when Sam and Samuel arrive to help, we see that Dean won that fight. For all of my derision against girls who fall for vampires, is it wrong that I find vampire Dean fighting his way through the nest completely, ridiculously hot?

The three men come together again to mix up the ingredients for the spell. This couldn’t happen a moment too soon, because Dean’s ready to snap and drink some blood. He drinks down Samuel’s concoction and promptly vomits what looks like a gallon of blood. As the spell works on him he flashes back through the scenes from the episode…and ends on watching Sam smile as he gets turned.

‘You Think I’d Do Something Like That, Risk My Own Brother?’

The next morning Dean goes to call Lisa, but chickens out and deletes the message. I’m going to assume we’re probably not going to see much more of her after their last encounter, but I’m also prepared to be proven wrong.

The brothers prepare to go off on the road again, but not before Dean tellingly remarks that he can trust Sam. After all, Sam has his back, doesn’t he?

Of course he does, Sam replies.

I have no idea what’s going on here. Whatever is happening with Sam goes way beyond the disassociation with people that he’s felt since he’s returned from Hell. At this point, I’d call him worse than Samuel, who obviously has an agenda and is keeping secrets. I don’t know how they’re going to fix what’s wrong with Sam. Does he not have a soul? Is he even Sam? The fact that he would willingly let Dean get turned – to catch the Alpha or for whatever reason – is probably the most horrific betrayal the brothers have ever faced in their entire relationship in the course of the series. Unlike every other time Sam has screwed up in the past, he no longer cares. He doesn’t seem to feel remorse. He’s just…empty. Cold.

I hate it. I don’t want to hate Sam. I want someone to fix this Sam problem so the brothers can go back to fighting all the monsters that are gunning for them and the other humans lately. Don’t these boys have enough problems?

You can watch a promo for the October 29 episode of Supernatural here.