I’m not going to apologize for this, but I don’t like Twilight. There are so many reasons I could give as to why, but I’m not really ready to incur more wrath from the more expressive Twilight fans than I already have (I’ve written some articles in the past about this). So the fact that Supernatural is taking a shot at Twilight? AWESOME.

It is with great pleasure, then, that I present you with two sneak peeks from the upcoming October 22 new episode of Supernatural (and, yes, Dean, the fact that he’s watching her sleep is kind of rapey). Despite the apparently seriousness of the promo we posted late last week (view it here), the first sneak peek makes me cackle with absolute glee at the vampire memorabilia decorating this young girl’s room, as well as Sam and Dean’s reaction to it. The second sneak peek shows in the boys chasing some vampires in a club.

I cannot wait for this episode. Plus, Dean turning into a vampire? Is it possible that too many awesome things can be crammed into 42 minutes? I guess we’ll have to wait until Friday night to find out.

Check out the videos below and then go take a look at the promo photos we previously posted for the episode. 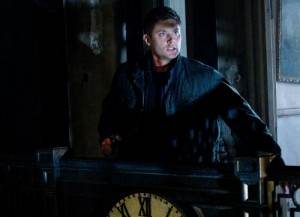 DEAN IS TURNED INTO A VAMPIRE

After a group of young girls go missing, Sam (Jared Padalecki) and Dean (Jensen Ackles) realize that a group of vampires have taken up residence in the small town. After a fight with two of the blood-suckers, Dean is bitten and turns into a vampire.

Samuel (guest star Mitch Pileggi) tells Dean he can change him back but he’d have to get the blood of the vampire who turned him. Dean infiltrates the nest and runs into the Alpha. Jan Eliasburg directed the episode written by Brett Matthews.