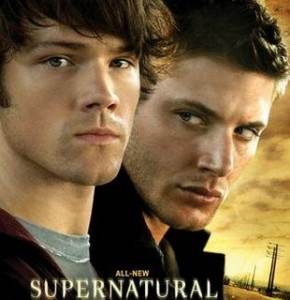 Confession: I never, ever watched a single episode of Supernatural until Boxing Day 2009, when my sister sat me down and made me watch a few episodes from season 3 while we waited to go see Sherlock Holmes. And then…

It was like crack. I turned to her and asked “Why didn’t you ever TELL ME that the show was this good?” After those two episodes, we were fighting over which brother we liked more. I’m on Team Dean (Jensen Ackles is so, so, so, so pretty. Just….*sigh*). She is not. Well, she doesn’t dislike him, but she’s wavering towards Team Sam. More proof that we will never get along and should just end this sham of a familial relationship once and for all (I also told her I was never going to go to Hell to save her and she was all “right back at ya!”, which seems fair).

So I promptly borrowed her box sets for seasons 1 and 2, and proceeded to stay up until 4:00 a.m. or 5:00 a.m. for four straight days during my holidays at the end of December, and watched every single episode of the first two seasons. In fact, I’m watching season 3 right now, trying to get through all the old episodes before the show returns on January 21 (check out a promo for the January episode).

Imagine my disappointment with the news that season 5 (the current season) was always intended to be the final season of the show. Word on the street is what the show’s creator, Eric Kripke, had set out a five year plan for the show and the story was to be wrapped up this year.

There’s a glimmer of hope, however, in the form of a scoop from EW’s Ausiello. He recently heard from CW president Dawn Ostroff that Kripke may be open to a sixth season:

‘I think he’s in that state of mind,’she says. ‘I had lunch with Eric the other day and he’s really excited about the show right now. I think he feels this season has been really satisfying for him. He’s certainly not running out of ideas by any stretch of the imagination.’

Ostroff, who says Kripke has been ‘hitting it out of the park’creatively this season, also points to Supernatural‘s ratings success as proof the show has a lot of life left in it. ‘The ratings are up,’she says. ‘We have more young women coming to the show than ever before. There aren’t a lot of shows that you can say are doing better in their fifth year.’