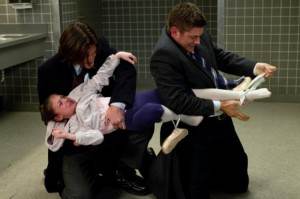 To be quite honest, I’m not entirely sure what to make of the ending to this week’s Supernatural. After returning from a multi-week hiatus, the Winchesters started investigating what looked like a normal case (well, normal for them), which actually turned out to be leviathan-related. At the end of the episode, the Winchesters got some intel on Dick Roman’s plan. Or, maybe they didn’t. But if they did, then it doesn’t necessarily make a lot of sense. Or does it? So confused. Let’s start at the beginning.

Sam has been suffering from severe lack of sleep since the last episode of Supernatural. Now that he has engaged with Lucifer, the devil refuses to give him any moment of rest and, subsequently, Sam is afraid to close his eyes. He’s been honest with Dean about his situation, but Dean doesn’t really seem to understand how serious it is, despite continuously insisting that Sam try and get some sleep. Instead of doing that, Sam suggests they investigate a case where it looks like a dancer literally danced her feet off (she really did…and it was very disturbing).

A quick trip to the police station – and a quick look at the crime scene photos – led the Winchesters to believe that something was strange with the dancer’s ballet slippers. They quickly tracked them to the bathroom, where a young girl was trying them on and nearly getting killed in the process. While trying to save her, Dean got kicked in the face multiple times for his trouble and also happened to touch the shoes. They both quickly realized they were dealing with a cursed object and tracked it to its source: an antique store.

Unfortunately, the owner of the antique store revealed that the shoes has originally belonged to his mother and they, like a variety of other objects that used to reside in boxes covered with various protection symbols, had been sold to a variety of people. Frustrated, the boys headed out to track down the other cursed objects. They were too late to save one woman, but managed to retrieve two other objects before they did damage.

What Does a Real Estate Agent and a Leviathan Have in Common?

But the curse objects weren’t really the focus. Much like a previous episode of Supernatural – “How to Win Friends and Influence Monsters” – the case of the week actually led the boys straight to the leviathans. While investigating the cursed objects, Dean quickly realized that something suspicious was going on in the town, something involving a real estate agency that seemed to be buying up an awful lot of property in a centralized area. Dean contacted Frank, who had been in touch with him throughout the episode, still searching for information on Dick Roman. Frank quickly discovered that the real estate agency was actually a subsidiary of Roman’s company. 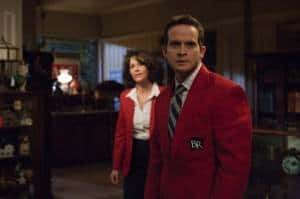 While Dean was putting all of this together, Sam was driving to meet him, and suffering from his lack of sleep. Falling asleep behind the wheel, he nearly crashed into a truck, but narrowly avoided disaster at the last minute. He stopped for coffee and who should happen to be at the same coffee shop at the same time? The real estate lady’s (Joyce) hopeless assistant, George. He recognized the Winchester and returned to his boss with the good news that they could settle in to eat the trouble-making brothers..

The leviathans had the antique store owner call up the Winchesters for a fake emergency and the brothers rushed right over. Quickly realizing it was a set-up, they fought with the leviathans. Fortunately, George wanted Joyce dead more than he wanted to kill the Winchesters, so he quickly told Sam how to go about decapitating Joyce. Once that was done – and the antique store owner had set off for a new life sans-leviathan – George said that he helped the boys for the opportunity to eat his horrible boss. But the brothers were far more interested in getting information on Dick Roman than making nice with the one leviathan who had (momentarily) helped them. 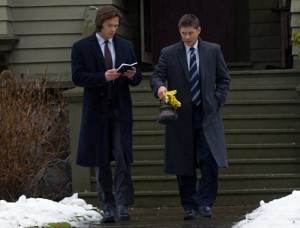 So the Ultimate Plan Is To…Huh?

This is where the confusion sets in. Despite denying knowing about Roman’s plans, George eventually revealed that the leviathans aren’t just hanging around in small towns or a field out in Wisconsin. “It’s everywhere. And it’s a lot more ambitious than this little project,” he explained. “We’re only here to help.” What they’re looking to build is a research center. To cure diseases. To cure cancer.

So let me see if I understand this correctly – Dick Roman and his leviathans (the monsters that were so bad they had to be locked away in Purgatory) have come to earth. Instead of causing the planet’s destruction (*cough* like certain angels and demons wanted to *cough*), they’re acting within the corporate structure. I mean, sure, they’re eating people along the way, which is completely serious. But they’re looking to cure cancer? For what? A lot of people online suggest that by curing cancer (and other diseases), they’ll be able to guarantee an endless supply of people. Maybe to eat. Who knows? Isn’t that all just a little bit…prosaic?

Where’s the ultimate destruction of humanity? Where’s the plagues being rained down on an unsuspecting population? Where’s the clashes between the soldiers of good and evil? Where’s all those things that monsters, demons and fallen angels like to do?

I don’t know if George was telling the truth. Or, perhaps, more importantly, I don’t know whether George was telling the whole truth. But I’m hoping there’s a bit more to this plan than curing cancer or creating a food supply. I’ll admit, I appreciate the absolute difficulty that must exist when trying to come up with a disaster larger than the apocalypse. So, at this point, I’m not panicking too much. I need to wait and see what else Supernatural is going to throw at us to really fully judge this leviathan storyline. I need to know their end goal. It could very well simply be creating an endless food supply or buying the goodwill of people (and thus creating an even more endless food supply) through disease cures. It’s just very commonplace. Then again, if George is so low on the totem pole, he probably doesn’t really know the ultimate plan.

I think I’ve said this before, but it is a bit frustrating not understand the villain’s end goal until later in the season. In earlier seasons it seemed like we understood the bad guy’s plans quite early, while in later seasons it’s been served up to us piecemeal. It’s not necessarily a bad thing, it’s just kind of hard to wrap your head around the endgame and really get invested in it when we learn about it later. 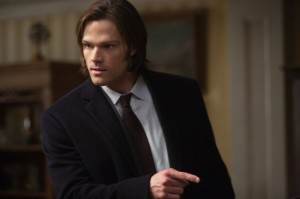 So Many Problems…So Few Solutions

In any event, I’m rather concerned about Sam. Not sleeping when you have a soul is, apparently, a lot harder then when you’re soulless. Supernatural has not always been kind to the youngest Winchester, putting him through the ringer time and again, and this season is certainly no exception. Sam’s problems are not easily resolved any longer and the fact that he crashes next week shows us how serious his situation is.

But I’m also quite worried about Frank. At the end of the episode, the Winchesters drove to his trailer and found it trashed, with blood spilled on the floor and walls. I think Frank is alive, otherwise I’m sure we would have seen his body. Did the leviathans get to him? Likely. Are they torturing him for information about the Winchesters? Also likely. It would be kind of cool to see the Winchesters come up against Frank again, only to learn that he has become a leviathan. Another horrible choice for the brothers to make: kill a friend and ally? It sounds somewhat sadistic to say that, but those kinds of terrible choices have always been at the heart of Supernatural.

I rather like the fact that most of the leviathans turn out to be smarmy or amusing…or both. I may not be fully on board with their plan, but I rather enjoy their appearances in episodes. They remind me of some of the better demons we’ve come to know over the years. Sure, they’re not up to the level of Crowley or Lucifer, but Joyce was rather funny with her overbearing nature.

Castiel returns just in time for the March 23 episode of Supernatural and Sam lands himself in a mental hospital. Will the angel be able to save Sam from his hallucinations? We’ll have to wait and see! In the meantime, check out a preview for the next episode.

And don’t forget to browse through our new Supernatural showpage. It’s a centralized location for all of our videos, photos, spoilers, recaps and information about the show.