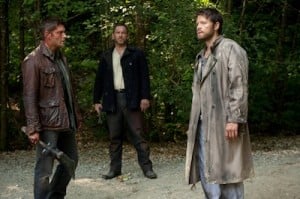 Dean came back from Purgatory in the season premiere of Supernatural. Â While Sam has spent the last year living a normal life with a new girlfriend, he came calling when he got word from his brother. Â The pair reunited at Rufus’ cabin where Dean expressed anger over the fact that Sam gave up on the family business. Â But when Dean uncovered multiple messages from Kevin Tran on Sam’s cell phone, the pair headed out to track him down. Â Eventually they found Kevin in Iowa and learned that he had escaped Crowley and his demons and now possesses some important information: he knows about the existence of a tablet that could close the Gates to Hell forever.

The Winchesters are now on a mission to retrieve this tablet before Crowley can get his hands on it. Â While they’re on the road, fans are learning about the year they spent apart and both of them are keeping secrets from each other. Â Dean’s big secret is his newfound friendship with Benny, a vampire he met in Purgatory and who helped him escape from that dimension.Â  For more on the premiere, read our full recap and review.

In next week’s Supernatural, Kevin tells the Winchesters that he’s worried his mother may have been compromised like his girlfriend and asks them to check in on her. Â Crowley has surrounded her with demons so the brothers sprint her away in the nick of time. Along the way they have to deal with a “Tiger Mommy” in the backseat of the Impala. Â And we get our first appearance of Castiel in Purgatory.

Watch a preview below for the October 10 episode of Supernatural, airing at 9:00 p.m. ET/PT on The CW. Â Check out our newest slide-show: Best Mythology Episodes.