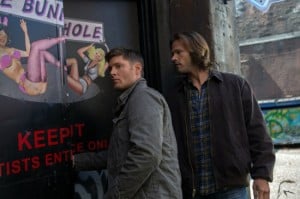 The first two episodes of SupernaturalÂ this season dealt heavily with the mytharcÂ of the Winchesters getting their hands on the Word of God tablet, but the third episode seems to be moving back into more monster-of-the-week territory, which can be just as enjoyable if done right.Â  And Supernatural often does it right.

According to the preview for “Heartache”, Sam will be reminiscing about the last year he spent with Amelia (and the dog), complete with flashbacks to sunny picnics.Â  With this “normal life” stuck in his head, Sam insists on telling his brother that once they find the tablet and close the Gates to Hell, he’s done.Â  Dean seems dismissive of this, convinced that hunting is in Sam’s blood as much as it’s in his.Â  Whatever Sam says now, I just don’t see him settling down in suburbia with dogs and picnics in the long run.

The argument takes place around the Winchesters’ most recent case, which involves murder victims who all received organs from the same donor.Â  Jensen Ackles’ father makes a guest appearance as a police detective who interacts with Sam and Dean when they look into the case.

Watch a sneak peek below for the October 14 episode of Supernatural and browse through photos for the episode here.Â Visit our Supernatural page for more spoilers, sneak peeks and reviews for the show.