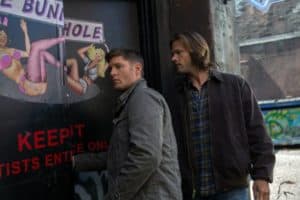 Supernatural’s third episode of the new season chose to only briefly mention the mythology and the search for Kevin and the tablet.Â  Once it was established that the Winchesters have been unsuccessful in locating the missing prophet, Dean decided to focus his attention elsewhere.Â  Namely, a new case.

This was a perfectly fine episode of Supernatural, albeit pretty “filler”.Â  With so much discussion lately about the mythology – including the tablets and the flashbacks – it seemed strange to see the brothers investigate a normal, run-of-the-mill case.Â  It wasn’t the finest stand-alone episode we’ve ever seen and it wasn’t the worst.Â  It was, for all intents and purposes, normal.Â  But what I found most interesting was the subtle glances into Sam’s psyche, which we’ll get to shortly.

The episode of the week focused on the death of a quarterback whose organs were transplanted into several people.Â  After some mysterious deaths were linked back to the sports star, the Winchesters learned that he had actually been a thousand year old Mayan athlete who made a deal with a pagan god to prolong his life.Â  He later fell in love and killed himself when he realized he could not live without the woman he loved (who was getting older).Â  But his organs led the transplantees to continue the sacrifices to the pagan god.Â  At least until the Winchesters killed the woman who had been given his heart, ending the whole sordid mess.Â  See?Â  Perfectly normal and a bit of a throwaway case.

The Renewed Desire for Normalcy

But there were two scenes that I thought really explained what Sam is trying to do with his life.Â  The first was when Dean confronted him about an email from a university about the admissions process.Â  The second was a flashback to the one birthday he spent with Amelia where she surprised him with a birthday cake.Â  Confused, Sam didn’t understand what was happeneding.Â  “You’ve never seen a birthday cake before?” Amelia asked with a laugh.Â  She was joking with that question, but we know that it’s likely Sam has never had a birthday like the one he spent with her. 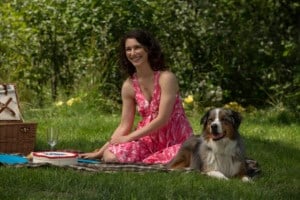 University and birthday cake, in many respects, represents Sam’s lost childhood.Â  We’ve heard the Winchesters lament many times about their less-than-stellar childhoods.Â  We’ve seen Christmases where their father didn’t even bother to come home, forcing Dean to pick up a pathetic Christmas tree and steal presents just so Sammy could have a Christmas.Â  We’ve seen the boys lack stability and a real home.Â  For a long while, Sam rebelled against his father because he wanted something more than what he was given.Â  He wanted a life free of his father’s quest and influence.Â  For a few years, he had that at Stanford.Â  Until Dean showed up on his doorstep, Jessica got pinned to a ceiling, and Azazel put his master plan into motion.

For a while there, Sam continued to rebel against the hunting life, believing that he could simply kill the YED and then go back to a normal life.Â  We call that season 1.Â  But then something changed.Â  Without Jessica to ground him, he started to let go of that dream.Â  Think back to the season 4 episode “Wishful Thinking” when Dean asked Sam if he would wish for a normal life again and Sam told Dean he would prefer to have Lilith’s head on a platter.Â  For a very long time, I think Sam repressed his desire for a normal life simply because he couldn’t see a light at the end of the tunnel any longer.Â  He was too caught up in Lucifer’s schemes and demon deals and his brother going to Hell.Â  Maybe it was always there at the back of his mind, but the wish was fairly dormant.

Until now, when Amelia offers him a chance at a new life.Â  Imagine how that must feel to someone who not only didn’t get to really experience it the first time around, but had also suffered through so much loss and grief.Â  And, maybe, without Dean around to keep him in the hunting lifestyle, Sam saw a way out.Â  Don’t get me wrong, I’m not – in any way – insinuating that Dean forced Sam into hunting for all of these years, but can we entertain the possibility that Sam may have done it not only for his own reasons, but also to be close to his brother?Â  To help Dean as well as save people.Â  Now, Dean is reconnecting with his old life.Â  Dean has always found happiness and purpose in hunting, despite the loss it brings.Â  He reaffirmed that in this week’s episode when he said that he understood what it was like to be a warrior.Â  Dean will never understand what it feels like to have a normal life, but he’s OK with that.Â  Dean doesn’t really want a normal life, he wants the idea of a normal life more than he can accept the reality of it.Â  And while he sometimes hung on to the idea of it long after Sam gave up on the possibility, I think he knows that it will never truly make him happy or give him purpose.