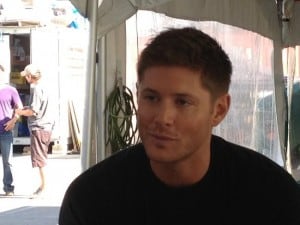 Supernatural fans are not strangers to reunions between the Winchesters after a long separation. The premiere of season 8 will, in some ways, mirror the fourth season premiere when Sam and Dean were reunited after Dean’s stay in Hell, or the sixth season premiere when Sam found Dean again after spending time in the pit himself. Of course, this reunion will be slightly different, because this time Dean was in Purgatory and he had a very different experience than his time in Hell. Meanwhile, Sam has been living a normal life, much like he had been before Dean sought him out in the pilot episode.

During a visit to the Vancouver set of Supernatural*, we sat down with star Jensen Ackles to discuss the effects of Dean’s stay in Purgatory, his new friend from “down there”, and his relationship with is brother.

“As we know at the end of last season, Dean and Cas got sent to Purgatory. We find that Dean has gotten out and the time that he’s spent there and what happened there has kind of changed his outlook and his perspective on things. [The Winchesters] are always kind of at war with the evils of the world, but he got kind of a heavy, heavy dose of it down there [in Purgatory] because he’s surrounded by all the things that he kills when he’s topside. So it was almost a concentrated version of what he’s used to. He’s really, really a hardened warrior and ready to use those sharpened skills in the real world. He’s a soldier, he just got back from war and it’s gonna take him a little while to adjust to the lack of threat, the lack of combat that he’s gonna be doing up here.” They’re currently filming episode 8 and we’re still learning about Dean’s time in Purgatory, so what happened to him down there will continue to be revealed as the season progresses.

Jensen went on to compare Dean’s experience with that of Jeremy Renner’s character in The Hurt Locker when he returned from war to his normal life and simply didn’t know how to deal with every day tasks – like going to the grocery store – that the rest of us simply take for granted. “I think that Dean….he was down there for a whole year doing this….and fighting and battling non-stop, covered in blood, covered in mud, covered in dirt for 12 months and now he’s back topside. He’s got his car and he’s got his brother, but he didn’t realize…..how easy he’s had it up here.”

Aside from some PTSD that Dean seems to be carrying back from Purgatory he also has a new pal: a vampire named Benny. We know that Benny not only helped Dean in Purgatory, but was also helpful in getting him back to earth. Some Supernatural fans may have suspected that Dean’s relationship with Benny is that of grudging acceptance, but Jensen describes it as something more real: “I’m really excited about that relationship, even on a personal level because it’s not only introducing a new character who I think is cool [but Ty Olsson is also] a really fantastic actor. He and I clicked right off the bat. The character is, I think, a really great kind of contemporary for Dean. It’s a foxhole relationship. He’s been at war with this guy. On paper it’s not the kind of character that Dean would allow to live, much less team up with. Benny really earned his stripes with Dean. He earned his trust.”

(Note: We did ask Jensen about Castiel in Purgatory, but if you watch the video below then you’ll see he side-stepped the question, so to speak. It’s clear what happens to Cas in Purgatory is a big secret). 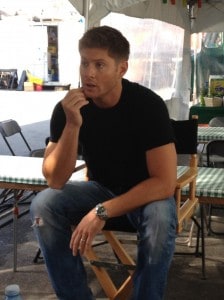 But how to explain this new relationship to Sam? Some fans may believe that Benny might be Dean’s dirty little secret, which is a common situation for the Winchesters. But Sam will be aware of Benny, even if we’re not sure when that will happen and whether Dean will come out and tell Sam about Benny or whether Sam will find out another way. That being said, Dean will be honest, even if it’s “difficult for Sam to understand [Benny and Dean’s relationship] when Dean comes back. So not only is it a unique, odd relationship for Dean to have after many years of fighting these things, but now to explain that relationship to his brother is going to pose some serious questions and some difficult things ahead. And for that reason I think it’s a great addition to the story.”

Of course, the question on a lot of fans’ minds is the state of the brother’s relationship, and that’s something that Jensen addressed, beyond the Benny issue: “It’s gonna take a little bit of time to warm back up to the relationship that he has with Sam. There’s also what Sam did for the past year, which kind of compacts the odd element that these brothers not only spent time apart, but it’s what they were doing. Whereas Dean was in this concentrated war zone, Sam was literally the opposite. These two brothers have really been living different lives for the past year and now they’ve having to come back together and pick up kind of where they left off, it poses a bit of a problem. [What Sam was doing while Dean was away] is sensitive especially to the relationship that he has with his brother, because he wasn’t doing what his brother wanted him to do. Having all that information come to light is going to pose problems for the relationship, but at the end of the day they’re still brothers and they still have each other’s back and it’d take way too much to break that up.”Â  You can watch a video interview with Jensen below.

The season premiere of Supernatural airs on Wednesday, October 3 at 9:00 p.m. ET/PT on The CW. Visit our Supernatural page for sneak peeks, photos and previews for season 8.