Home
Supernatural
Supernatural Season Finale Recap: Cut Off the Head and the Cliffhanger Will Follow 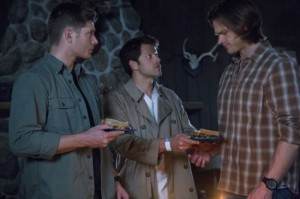 Hey, Supernatural, thanks for giving us one heck of a cliffhanger. The last time I was this freaked out was the season 3 finale when Dean was screaming while being strung up in Hell. Sure, we’ve been put in nearly the same position this time around, but I have no idea how they’re going to work their way out of this one. Will Dean be gripped tight and raised from Purgatory by an angel? Or is the guy all on his own?

Let’s go back to the beginning, where Dick and Crowley are trying to figure out a way to divide up the human race over a few glasses of scotch. The newly ensnared Crowley realizes that Dick has decoded the ancient tablet and knows about the Winchesters’ plan. So what is Dick to do? He decides to get Crowley to double-cross the brothers. In exchange, he’s prepared to give up Canada. Frankly, I think Canada got the better end of the deal here. But, seriously, I could watch these two smarmy guys negotiate contracts any way of the week. Once it’s finished, Crowley promises to foil Sam and Dean’s plan and he heads off as Dick prepares to greet his dignitaries.

Sometimes the Winchesters have thick skulls, and sometimes they have a little ingenuity. They’re going to need it by the end of the episode, but they open the finale in desperate need of the bone of a righteous person. Dean jokingly suggests they grab one from a nun and it turns out it’s the best plan they have. They procure a bone from long-deceased Sister Mary Constant and head back to the cabin.

At the cabin, Crowley fails to come when summoned, but Meg turns up moments later, followed by Castiel, who’s still mayor of crazytown. Dean manages to convince him to come inside, but he’s more preoccupied with stopping cosmetic testing on animals that making any sort of useful contributions to the team. He does, however, give them some useful information: his former angel garrison has been killed and Kevin is AWOL.

That’s when Crowley finally decides to stop by, much to Meg’s horror. He finally offers up his blood (after not being thrilled about Castiel’s resurrection being kept a secret) and then spills the beans about his deal with Dick. Is the blood really his? He insists that it is, and Dean seems convinced as well. After all, Crowley is nothing if not an opportunist. The big question is: from which death does he have the most to gain?

The good news is that the brothers now have all of the necessary ingredients to make the weapon. The bad news is that they’re not entirely certain it’s going to work because there’s no real sign that some special Leviathan-killing weapon has been forged when they put it all together. 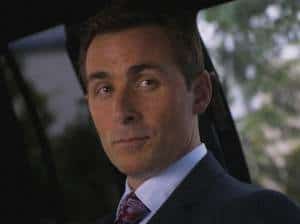 Back at Sucrocorp, Dick is putting his master plan into effect. Kevin is being kept locked up, trying to figure out a way to get out of this mess. Meanwhile, Dick has brought in the “dignitaries”: the other big-shot Leviathans who escaped Purgatory with him. It’s at this meeting that he unveils his master plan, which Kevin gets to hear courtesy of some bobby pins and some newly acquired lock-picking skills. Dick’s figured out a way to divide up the United States into various territories for things like food and labor. They plan on distributing coffee creamer with a poison that will kill the types of people that won’t make good long-term feeding subjects. In other words, the skinny people with high metabolism will be wiped out.

Outside Sucrocorp, Sam and Dean have pulled up, prepared to storm the building. With a little help from Charlie, who doesn’t appear in this episode, they gained access to the security cameras inside. The only problem? Dick has created more “Dicks”, by allowing other Leviathans to touch the original Dick Roman’s arm he’s kept on ice. So now there’s a whole bunch of them running around the building. There’s no way Sam and Dean can kill all of them in time.

The Maid Is Seriously Racking Up Some Overtime

Remember when Bobby possessed that motel maid at the end of the last Supernatural episode? He’s still inside of her, trying to figure out a way to get to, and kill, Dick. Even when he’s temporarily blasted out of her because she touches iron, he still possess her again, and leads her all the way to Sucrocorp. When Sam spots her, he immediately knows that Bobby is possessing her and he goes to head her off. Feeling vengeful, he tries to strangle Sam to stop him from getting in his way, but Bobby quickly realizes that his behavior is appalling and he lets the maid go.

The boys – and Bobby – have regrouped at the cabin once again and Bobby has a favor to ask them. He realizes that he simply can’t be in this fight any longer. Sticking around as a ghost is a one-way tickets to badsville.

And so the Winchesters have to say goodbye to their surrogate father once again. Bobby’s goodbye this time wasn’t as poignant as “Death’s Door”, but that’s only because we didn’t have all of the emotional build up in this season finale as in that previous Supernatural episode. That doesn’t mean it didn’t hit me hard. I think this is it, folks. This may be the last we see of Bobby (except for the very odd and infrequent return of all deceased characters on this show). But it leaves me kind of angry, because why bring him back if you’re only going to kill him again? I have to admit, I thought they would figure out a way to resurrect him. That maybe God would step in and grant us all a favor. I don’t think that will happen and it makes me very sad.

Concluded on the next page…