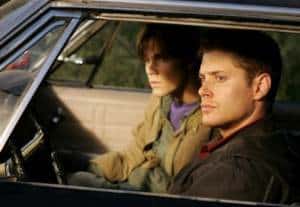 It’s good to have our beloved Winchesters back, no? It looks like the streak of super duper new episodes isn’t going to end anytime soon. We got a peek at the press releases for the next two episodes of Supernatural season 4, “It’s a Terrible Life” and “The Monster at the End of This Book,” and things are looking pretty darn interesting.

First up, in the wake of the heavy duty revelation that Sam and Dean were now up against Angels who have aligned themselves with the Demons, it is naturally time to take a breather with the semi-comedic episode “It’s a Terrible Life.” The episode cops a bit of style from The Office, but looks to have plenty of good old fashioned Supernatural grue. Here’s what TheCW has to say:

IF THE WINCHESTERS WEREN’T HUNTERS… – Dean (Jensen Ackles) and Sam (Jared Padalecki) are living very normal and separate lives. Dean is a corporate man who enjoys health drinks and listens to news radio vs. rock stations. He works at a company called Sandover Bridge & Iron Company alongside Sam (Jared Padalecki) who is in Tech Support. It seems as if the two do not know each other. However, after co-workers start committing suicide at an alarming rate, the two find themselves working side by side to solve the murders. James Conway directed the episode written by Sera Gamble.

Naw that we’ve had our comedy respite, it’s time to get back to the cold hard reality of the road with “The Monster at The End of This Book.” A somewhat experimental episode in that it dabbles a bit with metafiction, but the description indicates that this chapter of season four may pack some lean and mean mythology – particularly with the mention of the ‘other’ L-Word.

A VERY META SUPERNATURAL – Sam (Jared Padalecki) and Dean (Jensen Ackles) are shocked to discover a series of comic books titled ‘Supernatural’that accurately detail their lives as demon hunters. They track down the writer, Carver Edlund (guest star Rob Benedict), who explains he has visions of the brothers that he then turns into comic books. Chuck reveals that Lilith (guest star Katherine Boecher) is coming and she has a plan for Sam. Mike Rohl directed the episode written by Julie Siege.