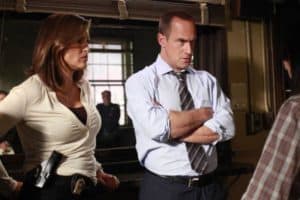 Law & Order: SVU is NBC’s biggest scripted hit – and even it is sliding, according to an article published yesterday by The Daily Beast highly critical of fourth-place NBC.

Calling NBC “in terrible shape,” Jace Lacob of TDB tells us that twelve-year veteran SVU is the network’s most popular scripted series, yet is only averaging 9.2 million viewers. That may sound like a lot to you and me, but it doesn’t even put the show close to the Top 20 on TV. According to our friends at Zap2It, to make the bottom of that list this week, the show would’ve had to reach 11.5 million. SVU was a rerun this week, but the point remains that its average viewership doesn’t amount to what it used to in a sea of stiff competition.

Now, 9.2 million is still nothing to sneeze at, and it’s not as if SVU is suddenly on the verge of being cancelled. Yet the decline in its viewership serves as an example of NBC’s overall struggles. The days when NBC coined the phrase “Must-See TV” seem like forever ago – because, as Lacob points out, the network doesn’t have the likes of a Seinfeld, Friends, Frasier or Cheers. In the last few years, it’s also bid goodbye to longtime staples ER and the original Law & Order, and allowed Law & Order: Criminal Intent to move to cable counterpart USA (where it is also ending this season). The Office may or may not be on its way out as well.

Lacob notes that there are still good series on the network, mostly its comedies. He cites Chuck, Community, Friday Night Lights (which recently was axed by DirecTV), and Parks & Recreation, and notes that Newsweek recently named 30 Rock the best TV comedy of the last decade. However, he says, “none receive the on-air support, marketing, or widespread promotion that they deserve.” Parks & Recreation is being held for midseason, and 30 Rock is down to an average of 5.7 million viewers.

Furthermore, he also takes note of something we’ve discussed here at TVOverMind: that NBC’s hoping for a hit has led them to grant full seasons to shows that would be potentially DOA on other networks. The Peacock asked for more of The Event (which has lost more than 5 million viewers, Lacob says), the so-so Law & Order: Los Angeles, and the critically scorned Undercovers and Outsourced. The one that puts all these numbers in the most perspective is the full-season renewal of Chase (averaging 5.2 million), when over at ABC, that network said goodbye to the critically acclaimed The Whole Truth (averaging 4.45 million). There’s only 750,000 viewers’ difference between the two, and the latter received more positive reviews, yet ABC saw fit to get rid of the Maura Tierney legal drama while NBC held on to the Jerry Bruckheimer procedural.

To see Lacob’s suggestions for how NBC can save itself, you can check out the Daily Beast column here. But what do you think? Do you watch more or less NBC series than you did a few years ago? Have you been underwhelmed by the network’s new shows? Let us hear your opinion below.