Home
Review
Taken 2 x 11: Password Was Great, but Probably Can’t Save The Show 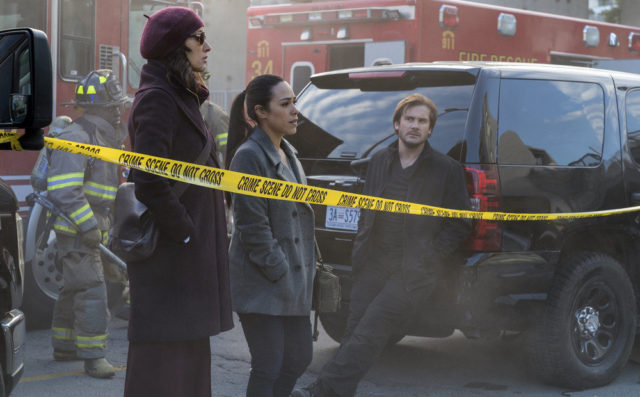 Taken 2 x 11, “Password” is the best of the season. Â It has a compelling story that actually makes you curious for more. Â It may be too little, too late, but let’s save that for the wrap-up.

Most of this season has been about establishing the new characters, which was necessary. Â Â Nevertheless, Bryan Mills (Clive Standen) got lost in the shuffle. Â He now has a tangible goal – taking down David Ramsey (Tahmoh Penikett). Â It’s a goal shared with Christine Hart (Jennifer Beals) and in this area, it finally feels like the equal partnership discussed in the season’s premiere episode. Meanwhile, his relationship with Santana (Jessica Camacho) is also more established – she is his comrade in arms.

Taken 2 x11 also gives more shape to Bryan’s development into the character from the Taken Movies. In “All About Eve” he explained why he works with Christine.Â  Ramsey called him a crusader, but it’s specifically against those in government causing harm to others.

“Password” defines the code of honor Bryan believes in as a soldier. Â His killing of henchman Morse (Ian Matthews) was as much about that as self-defense. This issue of honor is reflected in Ramsey and the corrupt councilman discussing the murdered mercenary. Â The hypocrisy of having hidden his connection to the man for years while lamenting the “good trooper’s” name being put out in the press as a traitor highlights the rightness of Bryan’s call. Â It also paints the men that hired Morse as being even worse than Morse himself.

Government corruption is a good theme for a show to have. Â That idea has been in play for some time though. What makes “Password” different is that there are now concrete antagonists to focus on.

And then there’s Kilroy

The other cool storyline unveiled in Taken 2 x 11 is about Kilroy (Adam Goldberg), it seems like he has a storyline all his own! He’s even got his own nemesis, the mercenary hacker Ella aka ELorenza ( Brittany Allen)! In a tit for tat kind of exchange, she reveals that Kilroy’s real name is Vincent. Â Plus there’s the discussion he has with). Whom did Kilroy leave behind when he started over – and why did he have to? He went to jail as Kilroy, so what on earth could have been so bad before?

As usual, Taken used issues that are front and center in the news. Fear of terrorism and the way we deal with immigrants was a major point in “Password.”Â

The sight of the blown out office in the skyscraper was reminiscent of images from 9/11 which invoked those emotions.Â  In forcing a look at our expectations around who commits such acts,Â Taken 2 x 11 did an excellent job of making us believe Vik Desai (Vinny Chhibber) was a terrorist. In fact, it may have felt like the writers arbitrarily decided to say he was not the bomber after the fact.Â

Had the writer done the above it would have been a definite flaw.Â  There’s no flaw. Do a rewatch and you’ll see the editing moments showing that the dots don’t connect.Â  To assume that the brown-skinned Indian man is the terrorist is the work of the viewer.Â  Did you fall for the magic trick? (I did.)

Now,Â  how did the bomb got planted? While we know who was responsible, we’ve no idea how it was done. Is that a problem? Not really.

Another point made in Taken 2 x 11 is the importance of cybersecurity. The lack of it on Vik’s part is how he had his identity stolen in the first place.Â  It’s a good public service announcement. Online people aren’t always who they say they are. More than that, there are people actively trying to steal your information. Â So doing things like guarding your password is pretty important!

The Wrap Up: Taken 2 x 11 Was Great, but Probably Can’t Save The Show

Despite Taken 2 x 11 getting the show to where it needs to be, Taken is unlikely to be renewed. The ratings haven’t been great and NBC has pulled Taken from the lineup. It returns after May sweeps – on Saturdays. That’s never good news for a series.

Taken season 2 had a rough start because they alienated their original audience by cutting the team, and not dealing with the romance Bryan developed in season one. Season two was really like season 1 of a new series. Â Doing this rarely works. It kills off the audience a show already had. Furthermore, since it’s not a brand new series with a different title, people that have already past on the showÂ don’t tune in.

This doesn’t mean you can’t transition a series into a new concept. A show just needs to honor the story the audience has been watching. Â For instance, in the premiere of Taken the point was made that the team got different assignments. That was good. It wasn’t ideal, but it was believable. However, in eleven episodes they never one mentioned the fate of Asha Flynn (Brooklyn Sudano) Bryan’s girlfriend. That was simply not credible given the importance of the story in season one. Not dealing with the fate of was a huge mistake. Â

Why They Needed to Remember Asha

Whether Asha lived but didn’t forgive him or she died, adding the details would have been helpful. Â For one, it could have been worked into Bryan’s understanding of what revenge can cost a person and why he sees it as a bad idea. Â This approach would have put more focus on Bryan earlier in the season. It also would have tied last season to this one.

These things could have helped keep last season’s viewers invested, Then, as the new characters and story direction gelled that audience could have created buzz about the cool new changes. Perhaps then the show would have garnered ratings that kept them on air Friday nights.

When Does Taken Return?

Taken will be back on Saturday, May 26th at 8 pm ET. Â You can always watch previous episodes via NBC on demand or Hulu.com. Who knows, maybe if those C30 ratings go up enough NBC will decide to keep the show around. Â It’s unlikely, but stranger things have happened.

Taken 2 x 11, “Password” is a good episode that gets the show to where it needs to be and invokes curiosity about what’s next Despite this, Taken is unlikely to be renewed.