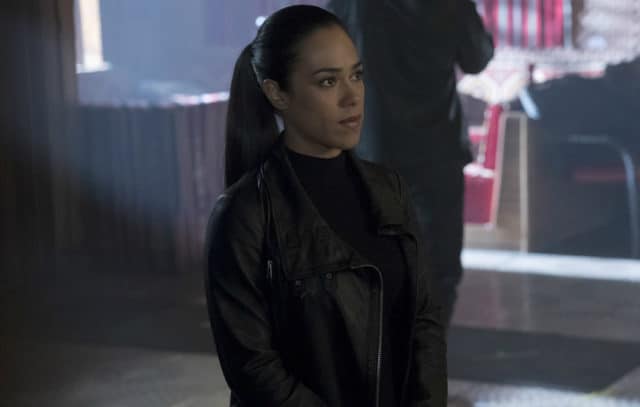 The episode itselfÂ has some not subtle commentary about the government of Turkey. the war in Iraq, and suggests that the U.S. government’s priorities are misplaced.Â  All of these things serve as the backdrop for revealing Santana’s past.Â  Â Her past involves sex trafficking, but she’s not a victim of that.

A diplomat from Turkey named Serhan Dogan goes missing and Christina Hart (Jennifer Beals) got the call from director Casey to find him. Now, the audience already knows the guy’s a sleaze who cheated with some blond. We also saw that someone clocked him in the head and drove him away in his own car. For viewers, the mystery is who, and why. (This viewer also wonders whose idea was it to have that overblown,” this is a tense moment” music when he’s hit and dragged out.)

When Christina presents the facts to the group – Bryan Mills (Clive Standen ), Santana (Jessica Camacho), and gray hat hacker Harden Kilroy (Adam Goldberg) all have different initial reactions that show how these dynamics are starting to gell.

Bryan is all business. He wants to know how long Serhan has been missing. When Santana hears it’s been 14 hours she wants to know why this guy gets special treatment. It’s usually 24 hours for an adult to be declared missing.

The answer to Santana is that Dogan is a Turkish diplomat, and US/Turkish relations are already strained. (Later on, Kilroy will show footage from the real-life incident of Turkish security attacking a peaceful group of U.S. protestors. )

The best exchange is saved for last. Upon hearing that the first sign of trouble is that no one could get the diplomat on the phone, Kilroy is the instant skeptic, 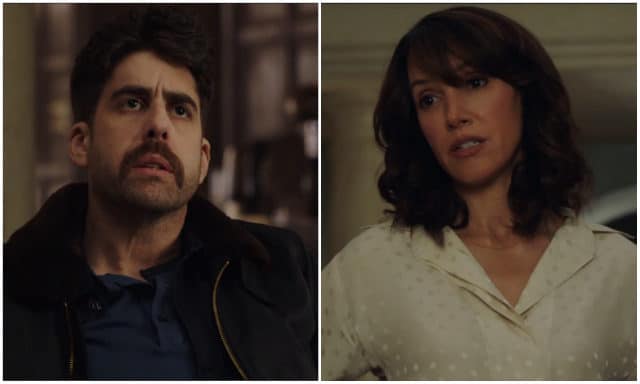 Kilroy: “Maybe he turned it off. Occasionally, people like to turn off their electronic yokes.”
Christina: “Yeah, well, his Mercedes was found abandoned down by the Anacostia River.”
Kilroy: “Yeah, that’s not good.”

We’ve had a few episodes now to get a sense of who Kilroy is, and episode 4 really helped establish him as a full-on team member and contributor. This scene lets us see how that integration has settled in. Kilroy’s role is to be the renegade that says seemingly outlandish things that will – to the surprise of everyone else – have some merit. We also learn he’s germaphobic in a funny bit that involves him having to pose as a john in a fleabag hotel.

In tracking down leads on Dogan Killroy discovered that Dogan has been involved with not quite legal-aged girls from a sex-trafficking ring on the dark web. The blonde he was with is one of these girls, a teenager named Ava (Briar May). They learn this from another girl, Lucia ( Arlen Aguayo) that works for the same pimp. Santana’s not exactly upset when they find the body of that pimp beaten and tortured before being killed.

What does upset her is when Christina calls Dogan and the pimp victims.

Victims? The only victims are girls like Ava and Lucia. Trapped and branded by low-life pimps to be sold entitled, protected scumbags like Dogan. They’re not victims, they’re criminals, and if you ask me they got what they deserved.

This is the beginning of learning why Santana was dishonorably discharged from the Army. To try and locate Ava, Bryan and Santana take a trip to a woman’s shelter. 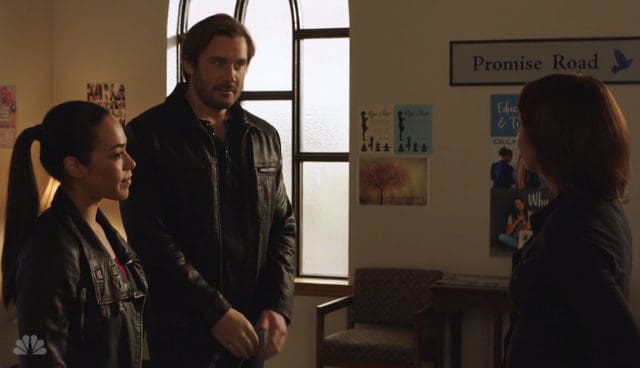 The Promise Road specializes in women and girls who have escaped from things like domestic violence and sex trafficking. When they arrive Santana is greeted warmly by the director as “Theresa.” (I guess that’s her real name?) It turns out “Theresa” volunteers there often.

The director then introduces them to Meg, (Zoie Palmer) who worked with Ava when she was there. Meg says she hasn’t seen Ava in weeks. However, Santana suspects otherwise – but she doesn’t give any sign of this to anyone.

Instead, that evening Santana insists on going off by herself to locate Ava. This annoys Bryan, who complains to Christina and demands to know what’s up. That’s when Christina explains how she met Santana.

It was after Santana had been working for the CIA in a counter-insurgency arms deal in Iraq. The program had been stopped, so the insurgences came back. It wasn’t pretty. Villages were ransacked – but that’s not all.

“They executed the men and the boys. And they raped and kidnapped the girls to sell into the sex trade.”

I’d like to say this is an extreme idea for a TV show, but it’s more like one “ripped from the headlines.” (Check out this article from The Guardian:Â The Slaves of ISIS the Long Walk of the Yazidi Women)

In this fictionalized version of things, Santana came across a group of insurgents with some of these girls – some as young as eight (also factual). She decided to save them by cutting a deal – arms for the girls. While Santana was facing a court-martial, Christina heard the story and was able to pull some strings to get her a dishonorable discharge instead.

The Dirty Cop Gets Caught

The worst part of Santana’s story comes at the end of the episode. The group figures out that Meg is the killer. A former victim of sex trafficking herself, Meg’s become a vigilante that goes after her clients’ pimps and johns. When Meg goes after Detective Lyons (Jeremy Ratchford) – the dirty cop who actually runs the ring – he turns the tables on her and sets her up to be killed.

Luckily Christina’s team had figured out about Meg and Lyons. They rescue Meg from nearly being killed, but then Santana goes after Lyons. Byran has to try and talk Sananta done from killing Lyons.

This is where we learn the rest of Santana’s story. All of her efforts to save those girls had been for naught. She tells Bryan that she’d turned them over to what she thought was the safety of the Iraqi police. A week later, the Iraqi police sold them back to the insurgences! So, dirty cops..it’d fair to say she really, really hates them.

Byran tells Santana that killing Lyons won’t make that big a difference – it will only change her. He suggests letting the punishment fit the crime. Killroy has tracked down all the money Lyons has made in sex trafficking. Between that and the girls’ testimony, Lyons will go to jail. Former cops do not do well in jail. Ultimately though that’s not the logic Santana uses to make her decision. 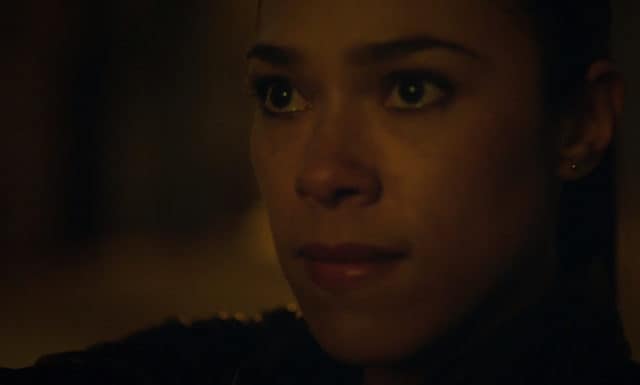 “I kill you, and you’re just another victim, and I would rather
expose you for what you really are.”

I kind of love that they used Santana’s earlier anger about the dead perps being seen as victims to have her not kill Lyons. It’s much more powerful than Bryan’s comment about ex-cops in jail.

This episode tackles the issues of sex trafficking, governmental hypocrisy, and vigilantes. The total inconsistency between how Taken season 2 episode 5 and Taken season 2 episode 3 deal with the idea of vigilantes is especially glaring.Â  The viewpoint expressed by Bryan to Santana about vigilantism in this episode is the total opposite of what he’s done in the past!Â  He tells Santana it’s not worth it.Â  Yet itâ€™s exactly what Bryan did at the end of Taken season one and in episode 3 of season two.
.
On the other hand, at least, â€œAbsalomâ€ puts the show on the right track in terms of tone.Â  Bryan Mills has a â€œspecial set of skillsâ€ that make him perfect for protecting others.Â  This mission is not the same as being a vigilante.Â  All the carnage in the Taken films comes as the collateral damage of trying to save his family, not from trying to exact revenge.Â  Bryan now finding revenge killing distasteful fits the character from the film – which is what the show is based on.

So, is this show is just going all over the map with random character choices? Maybe. The other possibility is to assume that Bryan has learned from his vigilante romps.Â  He now knows firsthand that killing for revenge is a hollow thing. If the showrunner and producers are consistent with Mills turning away from vigilante track we can go with the latter.Â  Bryan learned a lesson that he carries for the rest of his life.Â  Let’s hope this is the case.

Taken season 2 episode 5, â€œAbsalomâ€ makes it two in a row of decent episodes. At least the team’s background is all in place, and it puts the show on the right track in terms of tone.