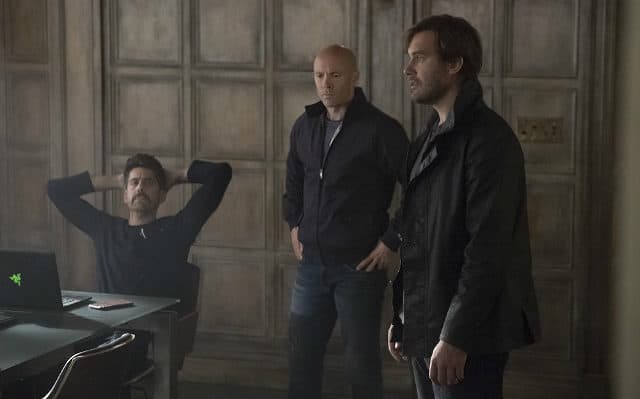 Taken season 2 – OPSEC was a huge relief after last week’s fiasco.Â  Furthermore, this was the first episode of the season where the changes really gelled.Â  Hopefully things will continue on this track!

Director Casey has asked Christina to have the team come in as extra security at a event where the President will be.Â  It’s the launch of a new aerospace factory.Â  Bryan and Santana (Jessica Camacho) are there.Â  She’s monitoring things outside and Brian’s in the building.Â  Christina and Kilroy (Adam Goldberg) are at headquarters monitoring via TV and computer.Â  Kilroy has seen a spike in “metadata” regarding the president via their special computer program.Â  (Apparently that’s supposed to mean something.Â  Nevermind that metadata about the president would likely spike in the area he’s about to visit…)

When the president and his detail arrive much is made about “the nuclear football” – which the briefcase that contains the nuclear launch codes.Â  It travels with the president whenever he leaves the White house.Â  Kilroy is not thrilled about it.

I mean, no one really knows what’s in that thing.Â  And whatever it is, it’s top secret and could do more damage than the Hale-Bopp comet.Â  All at the stubby fingers of a vulgarian who thrives on chaos.Â

I guess this story is set in present day America….

Anyway, Bryan happily recognizes one of men on the president’s detail as Colonel Mark James (Aaron Roman Weiner) an air force pilot and war herowho once rescued him and his entire team during a Green Beret mission gone wrong.Â  Colonel James has been promoted to carry the football.Â Â

However Colonel Jame is acting strangely.Â  Bryan figures out that “something’s wrong” and via headset tells Christina they need to evacuate the building.Â  Just then there’s a loud explosion.Â  As everyone is scattering Bryan sees Colonel James take off with the football!

Bryan and Santana try to stop James, but fail.Â  Â Santana does end up scaring off the person in a white van he was supposed to hand it off to.Â  Unfortunately when Byran takes after the Colonel the secret service let him go past and stops Bryan!

So why is a decorated war hero trying to steal the nuclear football?Â  Since the codes would be changed as soon as the football was taken the team figures out it’s not about the codes,Â  Christina figures Colonel James wants to sell the football’s site book, which contains all the secret sites where the weapons are kept.Â  Bryan however, defends James.

Meanwhile Kilroy has gotten footage of the white van and gotten the license plate.Â  He tracks it to the owner, but it’s a stolen vehicle. That info is then given to Santana who has a police contact who can get it run through their “plate scanner.” (Santana’s role as the person who has contacts everywhere that owe her favors is quickly being cemented.)Â  Christina tells Bryan she’s heading to the Pentagon to see what might have sent James to steal the football.

James’s boss is General Reed (Gary Hudson) –Â the head of the White House Military Office.Â  Christina explains to him that James had stolen the football and that Christina’s team knows this because her team had been assigned to the event. Reed’s first reaction?Â  He’s annoyed that he hadn’t been in the loop!

The football is my jurisdiction.Â  I should have been notified.

After his moment of pouting, that DOD had signed off on keeping him out, he concurs with what Bryan said.Â  His priority to get the football and Colonel James back unharmed.Â  He’s fine with cooperating with giving Christina all the information she needs on James – emails, phones, etc – but makes it sound like he’s giving her permission!

Since you’ve been running point on this, I want you to continue with the investigation. But I’m going to need real time updates, understood?

He’s acting like he has a choice here.Â  Christina could have gone over his head in a minute if he didn’t cooperate.Â  That tells us a lot about this guy’s ego and need to feel in control.

Why Colonel James Did It

So, what would make a war hero betray his country? Well, the show is based on the Taken movies….Â  Yep.Â  Someone has kidnapped his 10-year-old son Evan (Devan Cohen).Â Â Bryan and Santana tracked the van and found James trying to exchange the briefcase to its driver at a homeless campsite.Â  That exchange fails because of Bryan and Santaya, which is when James weepily explains his plight.

Who Wants The Football – and Why

The kidnapper is his nanny,Â  who wasn’t who she said she was.Â  “Linda Green,” the nanny, is really Nancy Clarke (Sarah Lind).Â  Â Now, before going any further, I’ve got to say the story of how he got this nanny wasn’t well constructed.Â  We’re told that after a bitter divorce, where the wife took everything but the kid, Colonel James found his nanny in a park one day.Â

Seriously?Â  The decorated war hero with the super high security clearance let some woman he met in the park who was good with his kid become the nanny?Â  Â Even though the character is written and played as a kind of simple guy it doesn’t really track with his background.Â  This is the weakest link in the entire plot.Â

Nancy Clarke is the wife of Julian Vox (Brian White), the leader of a Hacktivist group.Â  Â Vox was supposedly killed. Now the group suspects that he’s alive and being held illegally in a black ops prison that’s connected to the nuclear arsenal site maps contained in the football.Â  The team concludes she wants to trade the football for his release. 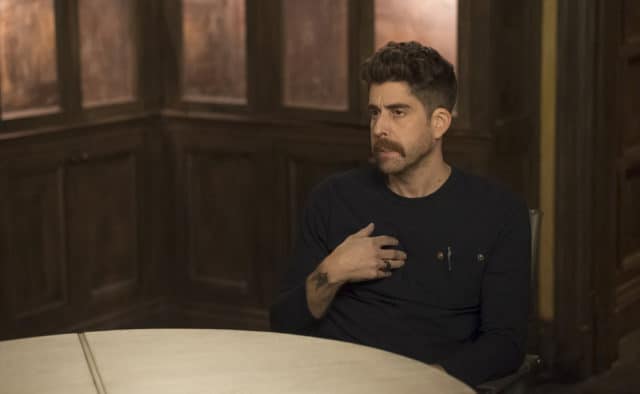 Kilroy figures prominently in this episode.Â  He creates the program that infiltrates the black ops site computer thatÂ  sets up transfer of Julian.Â  Santana still had to physically get him access at the site though.Â  Â It works, but things still get dicey.Â  Then, once Bryan and Santana break Julian out of that illegal prison, it’s Kilroy that’s able to get through to him that his wife hadÂ  kidnapped a child.

It helped Julian recognizes Kilroy as a hacker but can’t remember from where.Â  Meanwhile Kilroy has had a kind of admiration for Julian and his group.Â  That’s something he seems to have reconsidered,Â  One of things that’s striking is that the group is run like a cult.Â  Nancy Clarke’s sway over the other group members is such that one actually takes cyninade over being caught!

At first Julian wouldn’t believe that his wife would kidnap and promise to kill a child if she didn’t get him back.Â  Bryan suggests to Christina that Kilroy get a chance to convince him.Â  Â Kilroy is able to do so by pointing out the flaw in the thinking that “guys like us” – and by extension, Linda, use.

Essentially Kilroy’s argument is that they all start out with good intentions, but then, they get jaded. That leads to doing things you never thought you’d do.

After that speech, Julian believes that Linda has done this and becomes more willing to help – for immunity.

However, Christina doesn’t offer Julian immunity for his cooperation.Â  Her deal is the chance to have a fair trial – due process with a jury of his peers.Â  It’s a chance to get his message heard, and he might even find some sympathy.Â  Julian doesn’t love the idea that he could go back to jail, but sees the fairness in this.Â  HeÂ  agrees to help with the plan.

The team sets up a swap of Julian forÂ Colonel James’s son, and it all seems to be going well.Â  Unfortunately, there’s one very big snag.Â  Â General Reed has sent his people to get Julius – and given the order, “shoot to kill.” IÂ  guess that’s why he wanted the updates from Christina.Â  He runs that illegal prison! (It’s a good thing she didn’t tell him they’d gotten the football before!)

In the ensuing fire, Linda is apparently shot.Â  A distressed Julius stays with her while Bryan and Santana work to take out the rest of opposition.Â  One of them manages to blow up the SUV Julius and Linda were hiding behind.Â  Bryan looks sad – the assumption is that they’ve been killed.Â Â

At the end of the episode Christina confronts General Reed.Â It turns out he’s the one who had Julius locked away without due process!

Reed:Â  Â  Â  Â  Â Men like me do the things we do so that good people can have justice.

At that point Christina has him arrested by the military police.Â  A newscast shows that she’s had the entire illegal prison shut down!

As for Colonel James, he’s forced to retire, but he’s not being prosecuted.Â  That’s a big relief!Â  …Hopefully in real life the person in charge of protecting the nuclear football doesn’t have kids.

Of course, the rule of television is that if you don’t see the body officially pronounced dead, assume nothing. We didn’t see Julius or Linda actually die.Â  Kilroy, who’s watching the news report on his computer gets a break in his feed.Â  It’s a message that starts with a playful “Kilroy was here.” Then, in regular text:

Now I remember where we met.

Along with that text is a photo of Kilroy and Julius as younger men at a hacker conference.Â Â Kilroy then casually asks Bryan if they’d recovered the bodies after that explosion.Â  Bryan tells him only Linda’s was.Â  They think Julius’s body got blown into the river.Â  Â …So, now Kilroy’s got a secret!

One of the things that worked well in Taken season 1 was having Bryan Mills (Clive Standen) be a part of a team. Maybe there were too many team members – that’s a fair point – but the team dynamic itself was a good thing.Â  Â It’s hard to have Bryan stand out as different from other black ops guys if there aren’t any to compare him to.Â  InÂ Taken season 2 – OPSEC it finally felt like there was a team again!

It also was good to see ChristinaÂ Hart (Jennifer Beals) back in her element of wheeling and dealing with the bigwigs of DC so that her team could do there job.Â  There is no reason in the world to have Christina breaking into houses.Â  White collar episode is fine, but she someone who should always know someone who can can do a b&e.Â  They really should consider having some of the old team guest star if they need extra manpower.Â

Finally, the story structure of this episode flowed well and added up.Â  After last week that’s a huge plus!

InÂ Taken season 2 – OPSEC it finally feels like the the show is finding its way. Let’s hope it stays on track!