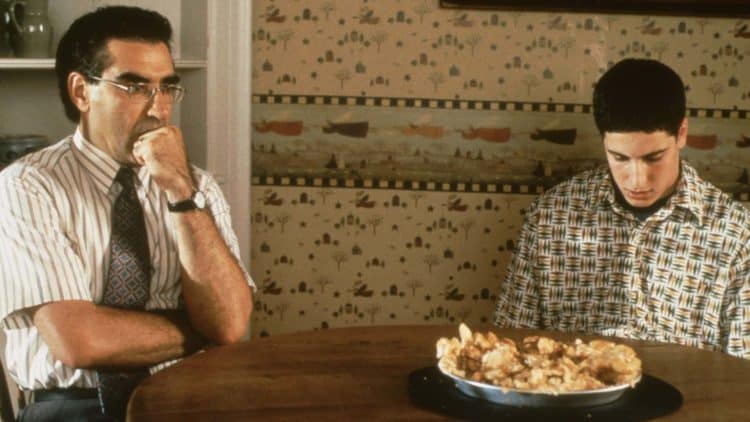 Let’s do a quick tally of the American Pie movies, shall we? There’s been the original high school movie, followed by the college movie, then the marriage movie, then the reunion movie. What’s left, the watching your kid go to high school movie to close the cycle? Tara Reid, an American Pie alum, is stating that there’s an American Pie 5 script that’s been developed and that the movie will happen at some point, which means that unless something untoward happens between now and then that it could very well come true. But should it? Should it really? The American Pie movies have been vilified and glorified alternately over the years, with many people siding with those that say that this movie couldn’t be made today, while others tell those folks to lighten up and enjoy the satire of it all. There are of course many aspects of the American Pie movies that are troubling to some folks since they deal with subjects that might not be something that one would think of mentioning in polite company, but the fact is that those that want to call this franchise an obscenity are still those that glorify movies that others would call out for their troubling issues. Let’s face it, something is going to offend someone at any given moment of the day, and American Pie is by far and large NOT the worse of offenders when it comes to the subject matter.

Seeing another movie come from this franchise really make a person think that it should be the last, at least the last of the core movies since the feeling is that everyone would hopefully be hooked up with someone at this point and that those that have kids would be watching them head to high school, while those that were still watching them grow would be going through their own issues. But it’s fair to say that with how the last movie ended that it might be that things will hit another snag and, depending on who wants to and can come back, the story will be every bit as messed up as the other four have been. That’s the charm of these movies though, since Jim, Oz, Kevin, Finch, and Stifler are the kind of guys that are great as a group, but on their own a little hopeless. To be fair, Kevin is the one that appears to have had the best time apart from still having feelings for Vicky, since unlike Jim and Michelle he hasn’t been caught in BDSM gear in public and unlike Stifler he’s married and happy. But the hilarity of watching the guys go through the process of growing up from high school students to adults that still don’t have everything together has been fun, but like everything else, there’s a time when things have to end and the show has to branch off in different directions, as it already has, and refrain from making any more new movies. This trend that’s been continuing onward as older movies are being remade, rebooted, and continued with sequels and revivals is beyond tiresome, but people are still paying for them for some insane reason.

Seeing an actual new movie come out these days is a joy since it means that creativity in Hollywood isn’t dead yet, and even if various elements are recognized within one new movie or another it’s still easier to watch since it hasn’t been seen in this manner before. The American Pie movies have been the same thing since they were in high school, the main characters are working out their various issues and still coming up short quite often since it would appear that they start doing okay and then trip up on something that should have been easy enough to navigate. To be fair, each movie is great since it can easily apply to those that remember or are currently in the stage of life that the movie is depicting. Things have definitely changed since the first movie came out, but many of the situations still apply no matter how one feels. But a fifth movie really feels like it should be the last, since if it does end up happening it should be the final look at the core group that helped to make this franchise so great. Some might want to disagree by stating that the American Pie movies are little more than trash, but seriously, let’s take a look at today’s movies before we judge too hard and realize that every generation has its own set of movies that will be judged harshly by the generations that come after.

So long as the fifth movie doesn’t go ‘woke’ it feels that things should be primed to make this worthwhile, at least for one viewing. But again, it should be the last, in our opinion.