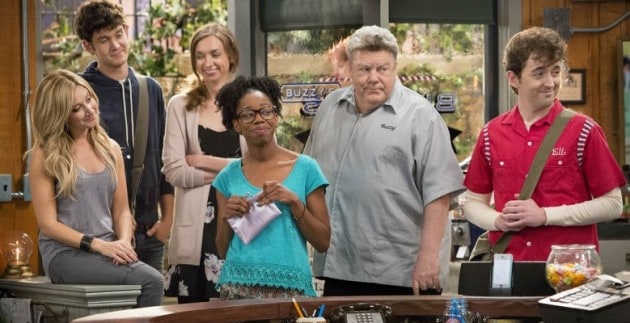 I have a special appreciation for TBS and its ever-changing lineup of multi-camera sitcoms; while networks have all but abandoned any kind of creative ingenuity with the long-standing genre, TBS still holds its sitcoms to a slightly higher standard when it comes to the execution of these shows. On TBS, shows are encouraged to embrace the stylized, budget-friendly production, whether its with mile-a-minute joke delivery, encouraging physical and/or musical performance, or just understanding that a great cast of actors can make even the most saccharine, basic material work. On occasion, this formula fails miserably (Sullivan & Son, anyone?), but it’s also led to a few memorable series;Â My BoysÂ andÂ Ground FloorÂ are among the best sitcoms of the last 15 years, shows that transcended their broadness and became remarkably entertaining series.

Of course, they haven’t alwaysÂ pushed the genre in such interesting ways:Â My BoysÂ andÂ Ground FloorÂ only lasted for 69 episodes combined (or the improv-heavy 10 Items or Less, which lived for 21), while their two Tyler Perry creations, the horribleÂ House of PayneÂ andÂ Meet the BrownsÂ produced 394 episodes between each other over the years (also, there was Men at Work – ugh, that was terrible). This year’s Your Family or MineÂ fell somewhere in the middle – and their latest comedy offering, Clipped, seems snug right along next to it, not as forward-thinking as something likeÂ Ground FloorÂ (can you tell how much I absolutely adored that show?) but certainly not as regressive to the format asÂ Men at WorkÂ or any number of CBS and NBCÂ sitcoms that fail to impress on any number of basic levels each fall and spring.

Honestly, I came intoÂ ClippedÂ hesitant, knowing it came from David Kohan and Max Mutchnick, creators ofÂ Will & GraceÂ (which isÂ severelyÂ overrated) and the deplorableÂ PartnersÂ on CBS a few years ago. The setting may change, but knowing the style of these two,Â ClippedÂ comes with a very specific expectation; there are going to be a LOT of gay jokes, and ones that take no hesitation to consider how stereotypical they may be. The thing about Kohan and Mutchnick comedies is that they understand the pace and tambor of a sitcom, they’re able to just deliver joke after joke without pausing to consider any of them: and whenÂ ClippedÂ opens with George Wendt and Reginald Veljohnson kissing and celebrating their 42-year long relationship, I was prepared for the worst.

And while the gay jokes never subside through the first seven episodes I’ve watched,Â ClippedÂ is an endearing little throwback to single-location sitcoms of old. Set in a Massachusetts suburb at a barbershop,Â ClippedÂ brings to the table everything one might expect: there’s goofy accents, an “angry black woman” character (played with a welcome deadpan by Diona Reasonover), a Catholic character (the lovely Lauren Lupkus), the ‘big catch’ actor (Ashley Tisdale), and a lot of generic references to Boston sports teams. This is baked into the show’s blueprint: the low-rated cable sitcom format almost demands all these things exist, which seem to doom it from the start, in this modern age of nuanced, often pretentious television.

Despite that, however,Â ClippedÂ is fairly charming, particularly in recent episodes, where it’s pushed beyond its status quo to explore the personal transformations quietly driving the dramatic undercurrent of its first season. The first four episodes are pretty typical: lots of time establishing dynamics and rapport, without a lot of narrative ‘umph’ to back things up besides characters revisiting high school dramas (there’s a runner between episodes of Mike Castle’s A.J. trying to start a baseball career, but it’s the lightest of touches). That’s all and good, but there’s no senseÂ ClippedÂ is trying to build something meaningful – until its fifth and sixth episodes, “Big Gay Wedding” and “World’s Rudest Barbershop,” which tap into potential the show failed to display in its first two hours.

“World’s Rudest Barbershop” is really the highlight of the show’s first eight episodes that have aired. “Big Gay Wedding” is a great episode exploring the idea of love in numerous familiar, traditional ways, but ones that come from very informed places with its characters, which helps really create an emotional foundation to build on. “World’s Rudest Barbershop,” however, is a much more ambitious half hour, one that challenges A.J. to rethink about his life when his friend Mo (the “quirky” member of the crew) accidentally tears his pitching elbow, effectively ending his pitching career. Through typical sitcom wackiness, A.J. realizes that his injury is not the end of a chapter in his life, but the beginning of a new one – and when Mo helps him find his calling as a writer, it turns “Barbershop” into a pretty effective little episode about the value of friendship in helping us work through personal crises.

Of course, theÂ next episode (last week’s “Mo’s Ma”) returns to the familiar land of gay jokes and low stakes (plus the obligatory “when will they” story between Tisdale and Castle’s characters) – heightened by these previous two episodes, however, the formula for a typical half horuÂ feels a lot warmer and lived in. And there’s a certain innocence toÂ Clipped‘s constant gay humor: it’s never tipping its hand into turning their lifestyle into an exaggerated joke for the sake of humor, which shows there was some growth in the time betweenÂ Will & GraceÂ to now. And while itÂ may never blow anyone away with ingenuity, I still think there are places for low-budget affairs likeÂ ClippedÂ on TV. Sometimes, it’s nice to enjoy something with low stakes that doesn’t constantly stoop to offend its characters or real people to get a laugh, and ClippedÂ offers exactly that.