Home
Teen Wolf
Teen Wolf: You Belong To Them, Scott… 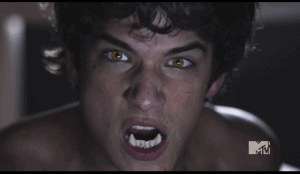 Damn. Scott cannot catch a break can he?

Last night’s Teen Wolf gave us our first battle between werewolves, which had my Twitter and Facebook feeds going off the rails with buzz. Personally, I thought the fight between Scott and Derek was just a sampler of what’s to come, which has to be epic given the information that was dropped concerning more werewolves descending upon Beacon Hill. This is where Scott finds himself yet with another dilemma to add to his collection of mishaps he’s incurred since his trek on the wild side began. Not only was it revealed that Derek is NOT the one who bit Scott, but Scott actually belongs to a “pack” now and the alpha of the group wants our teen wolf to follow rank as well. So Scott basically has sort of passed the hazing to get into this brotherhood, but does killing someone seal the deal? Will Scott get his full fur coat for such a deed? Ay-yi-yi!

So in actuality, ‘the dream’ Scott thought he was experiencing was a direct psychic link (or call?) from his superior wolf, which makes me wonder if this link can be established in human form? Any suggestions? Any?

Meanwhile in Scott’s normal life, he has to deal with another alpha male fighting for territory in the form of Jackson, who seriously has it out for Scott for some reason other than a starring spot on the lacrosse team. Why Jackson feels so threatened by Scott all of a sudden is beyond me. He has his social stature on lock and Scott is not trying to come after his girl (although Lydia seems like she would jump ship when the chance, and person, presents itself), so what gives? Maybe Jackson is trying to overcompensate for something that we have no clue about as of late. Either or, he really needs to tone down the “witch hunt” a bit.

Speaking of hunting, what the hell was Mr. Argent’s problem and why did he come after Derek? I’m going to go ahead and call it here that Mr. Argent is either 1) the Alpha werewolf who has his eyes on Scott, 2) just a regular hunter who has had run ins with Derek before, 3) tying to protect Allison’s secret of being a werewolf by any means necessary. Yes. I think Allison is a wolf. Did you see how she leaped from the roof? Gymnastics my ass…

On the love side, Allison is becoming a force of nature with Scott’s emotions, which seems like it can be a catch-22 if anything. However, I want to bet that Allison will end up being the lever of sorts in Scott controlling his inner beast. It seems like he cn focus when Allison’s near and maybe that has something to do with him not wanting to hurt her. Who knows? It still seems like it would be a plausible explanation in how to help control Scott’s transformations, which I hope we get a concrete explanation for soon.

Again, Stiles stole scenes left and right and thank God the writers are giving this character the funny stuff to work with. The ‘Batman & Robin’ exchange with Scott and the random ass musings of if he was attractive to gay guys? Classic. Keep em coming.

Did anyone notice that Scott’s boss also played the father of MTV Skins character Cadie? In that show, he was a taxidermist and a very weird on at that. Weird coincidence or a pseudo-crossover? Let’s go with the former…

What else did you guys love about last night’s episode of Teen Wolf? Getting better by the second? Or not tickling your fancy?