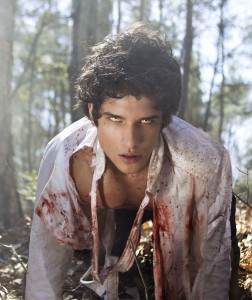 When news of an updated version of the 1986 Michael J. Fox cult hit Teen Wolf was headed to MTV, there was a collective groan in the blogosphere. However, once word got out that the material for the new show was taking a darker path this go around, those groans were replaced with a peaked interest on just how dark the show could become.

Last fall, several critics and journalists were treated to a look of MTV’s new horror dramedy starring Tyler Posey as Scott McCall, the unlucky (lucky?) teen cursed with ability to howl at the moon and grow hair in several unwanted places. The unfinished presentation wasn’t all that bad. There were areas that clearly needed work and I am not talking about the missing CGI/make-up effects either. And by watching tonight’s premiere, I can say that changes were made in some areas… but not a lot.

One thing is for sure, this is not the Teen Wolf your father grew up on…

Since you probably have seen the show already, I will bypass the premise and just get down to the nitty-gritty. The aspects of the Teen Wolf pilot that work are mostly in the interaction between Scott and Allison (Crystal Reed), the new girl in town that catches our protagonist’s eye and is the catalyst for his transformation under the full moon. Reed is easily the girl-next-door, but she in some way makes it fresh to the point that I actually loved seeing her on-screen. With the twist being introduced at the end of the episode, I have a feeling that Allison will get a hell of lot more intriguing as the show moves forward.

As for the love that will undoubtedly unfold between Scott and Allison, I think that’s where the show can gain its strength due to the complicated matters of falling in love with the girl, whose father just so happens to be a werewolf hunter. When this was introduced at the end of the pilot, my interest was renewed and my worry dissipated away. Despite the simplicity and conventional aspect of the scenario and the underlying element of teen angst, the formula works as we are evidenced with the teen crowd who devours genre fare as “Twilight” and The Vampire Diaries. Instead of an innocent, precocious female protagonist pouting to us on a weekly/annually basis, we have a hormonally challenged male to sympathize with and the curse of the werewolf is a perfect way to explore those themes. Believe me, I know.

Other things of note is the werewolf mythology itself, which is kind of blurred at this point and is a given so early in the game. With that said, there was only one quibble that I hope the writers answer later in the season and that’s the transformation himself. If we are to believe that Scott was bit by Derek (Tyler Hoechlin), who was a full werewolf at the time, why didn’t Scott turn into a full wolf himself? Is it a gradual process that will come later in the show? Or did the creators want to show an actual werewolf and not actual wolves running around the woods ala TVD, True Blood, and in some capacity, “Twilight?” If the answer is the latter, then I’m all for that change of pace when it comes to the representation of the werewolf, because the werewolves of The Howling, An American Werewolf in London, and Ginger Snaps have been severely lacking as of late. I know there is the issue of a budget in play, but thank God that Teen Wolf decided to go a different route and bring those types of werewolves back to our screens.

Which is why I want this show to work, because my interests of the werewolf has grown exponentially as the TV landscape that is becoming overrun with vampires. It’s time for the werewolves to come have a show of their own and Teen Wolf can be the breaking point in more werewolf shows making their way to television. If the preview shown at the end of the episode for the upcoming season of Teen Wolf is any indication (which I enjoyed way more than the actual pilot), then the steps for the wave of werewolf based shows could actually become a reality.

I’ll see you guys tomorrow night for the second part of the pilot premiere!