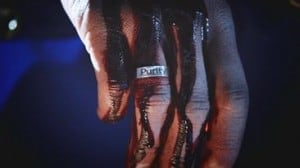 The following pic has been dubbed a clue to the mysterious death on tonight’s episode of Teen Wolf, which MTV has pretty much warned us to prepare for all week. The sliver “Purity” ring itself should send red flags to the identity of the poor soul who meets their maker tonight, but at this point in time only two unfortunate people come to mind on who the bloody hand could belong to.

1) Heather – This choice could be considered the most obvious by viewers since a) Heather was desperately about to lose her virginity to our boy Stiles, and b) because Teen Wolf showrunner revealed on the show’s official Tumblr page that we will discover the young girl’s fate tonight. The only problem is that for MTV and Teen Wolf to drill it into our heads that “death is coming” all week, we would be lying if we said we wouldn’t be highly disappointed if Heather (a very minor character) turns out to be the unlucky victim.

2) Erica – Yes, we know we declared the lovely, but deadly Erica dead as a doorknob last week/ However, Jeff Davis has ‘counter-declared’ that we haven’t seen the last of the original (at least on screen) bad girl werewolf just yet. Plus, if you watch the clip below closely, then you can see a defeated Derek holding who seems to be a very limp Erica in his arms. Also, since Erica has strong relationships with most of the cast and is an integral part to the Teen Wolf tapestry, her death would have enough weight to hold up to the “death is coming” moniker from this past week.

Honorary (But Not Honorary…) Mention: Boyd – From several different angles, the bloody hand in the photo could be mistaken as not only a guy’s hand, but a black guy’s hand as well. With a super-charged and ferociously deadly Boyd on the loose, it would only make sense, sadly, if Derek took down one of his own for the better good. The only problem with this theory, which is why it’s only an honorary one, is if Derek puts down Boyd then he has to put down Cora as well. I could also say Boyd wearing a “purity” ring seems highly unlikely, but that would be a silly misconception on my part.

Take a look at the trailer and make your own assumptions on who we will say goodbye to on Teen Wolf tonight below.