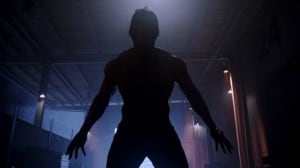 MTV finally unleashed the season three premiere of it’s cult hit supernatural drama Teen Wolf and the episode left me howling for more from Scott, Stiles and the rest of the Beacon Hills gang now that they’re faced with an even deadlier foe than last season’s nerve-wrecking Kanima. Unless you have been living under a rock or missed the last few moments of last season’s finale, then you already know about the mysterious and highly lethal Alpha pack that have landed in Beacon Hills. Even though I’ve heard just about everything released about the new Big Bads, none of it prepared me as I watched these bad asses induce terror and sex appeal to an unsuspecting audience.

While the Alpha pack had their moments epic shine throughout the episode, let’s not forget the well-executed character moments and other “OMG!” incidents from the night.

Initially, I felt that the ‘tattoo’ arc was going to last longer than tonight’s episode, because of Derek not having a problem of maintaining his tattoo. However, Scott’s explanation for wanting to brand himself immediately was just as satisfying as anything werewolf related. Obviously the break-up between Scott and Allison did a toll on our hero, and I can only imagine how the four months of radio silence added to that pain. Let’s hope that when he and Allison resume their relationship that Scott’s “open wound” will be no longer needed. But he should seriously keep the tattoo.

The only thing we know at the moment concerning the Alphas are that they are dangerously smart, ridiculously fast (did you see the Carver twins chasing that motorcycle? God damn…), and they have their leader, Deucalion, had his ‘eyes’ set on taking out Scott through a third party, aka Derek. What type of wild ass grudge does the Alpha Leader have against Scott to want him dead on sight? Plus, what did the mysterious ass-kicking girl mean about Scott becoming someone Deucalion will fear? Is Scott a “chosen” werewolf with a big destiny? Me likey if he is…

Plus, let’s talk about the new wolves on the scene, most notably the Carver twins and the female Alpha, who both delivered the chills with their performances in their respective scenes. And I still can’t get over the twins merging together to turn into a mega-werewolf. Where do they do that at? Oz, Alcide, Tyler, and Klaus? You four need to hold your heads down in shame. In shame, I tell you!

We didn’t get to know much about the new girl, who saved Isaac’s life, but she did leave behind a treasure trove of questions behind before getting her throat ripped out by Deucalion. Was she a fellow werewolf, or some other supernatural being? Was she working with the mysterious group Dr. Deaton and Ms. Morrell belong to? Was she just a human with connections to the supernatural world? 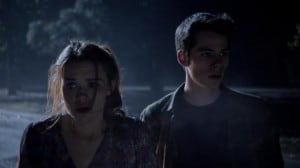 Finally, was the symbol the new girl burned on Allison and Lydia’s wrists another representation for the Alphas and will it help Scott and Derek find Erica and Boyd?

Also, the new girl’s death carried on the tradition of someone being sacrificed/dying at the hands of Teen Wolf‘s seasonal Big Bad in the season opener. I would so rock that honor with pride if I was that actress.

The End of the World? Or Mother Nature Gone Amok?

Not only did Lydia have a literal run in with a deer and her car, but we later found out that her itty, bitty dog bit her as well. Then hell came in the form of a flock of birds who didn’t get the memo that Alfred Hitchcock’s The Birds filmed over fifty years ago and attacked the Wolf Pack’s class. Initially, I felt that Lydia was either unknowingly responsible or a target for Mother Nature’s pissy tantrums, but it turned out that neither was the case. It was just a big ole scary omen that also sent Dr. Deaton’s furry patients to commit a mass hara kiri to themselves. Of course, this massive event brought up more questions such as, 1) is the Alpha Pack the cause of the strange behavior in the Beacon Hills animal community? 2) If not, then what the hell else is coming for Scott and his crew?

While those were the main beats from the episode, there were other noteworthy moments from the night:

1) In her quest to get over Jackson (who is now in London), Lydia became a bona fide playa in need of a “distraction.” Enter Aidan and Ethan, one of which could have Lydia saying, “Jackson who?” by the end of the season.

2) Allison and Mr. Argent have grown closer after losing Mrs. Argent and being duped by the still M.I.A., deranged Gerard. Their pact to stay out of Beacon Hills’ supernatural element was a surprise, but I wonder how long that particular stance will last between the two of them. Plus, wouldn’t other Hunters come snooping around to see why Argent hung up his Hunter’s hat for the moment?

3) Speaking of parents, it’s cool to see Ms. McCall being tolerant of Scott’s…condition. Maybe she conferred with a copy of “How to Handle Your Teen’s Supernatural Abilities: A Parent’s Journey” by the late Joyce Summers? I hear it’s a great read for situations like this…

4) No Stiles/Derek bromance scenes in this episode. Do I need to say that I was a sad panda over this?

What were your thoughts on the season premiere of Teen Wolf?