Home
Teen Wolf
Teen Wolf: Now THIS is What I’m Talking About! Bring On The Wolves!

Okay, I think I’ve fallen head over heels in love with Teen Wolf.

Last night’s conclusion to the two-night premiere event delivered the goods and then some. All of the quibbles I had about the first episode were answered and the answers not only made sense, but they also a) enhanced the plot further and b) lead to even more questions that I don’t care if they’re answered in the next episode or later ones, because the show is that damn good. Everything just meshed and flowed last night, from the interaction between Scott and Stiles to the stand-off between Scott and Lydia in the classroom scene. If I missed the show’s tone during the pilot episode, then I finally latched on to it last night and I can seriously say that MTV should have a bona fide cult hit on their hands.

But before I get ahead of myself, let’s discuss some of the key plot points from last night’s episode, complete with musings for what could possibly happen next.

The revelation that the full moon is not the only trigger to unleash the beast was pretty damn cool. Sure Scott turned Olympic gymnast on the rugby field in the last episode, but he never really wolfed out to the point of ripping someone’s head off. With all of the stress of the curse and keeping up appearances on his back, I was sure that Scott would drop the ball (no pun intended) on the field in some capacity bigger than what was displayed in last night’s episode. Mainly, I thought he would lose the game on purpose to make Jackson look like an a-hole and to curb his anger, which was understandably flared by Lydia’s quest for domination on the popularity food chain. With all of that noise happening in his life, as well as the complications with Allison being in a league of their own, declaring Scott as being under pressure would be the understatement of the century.

I could get ABC Afterschool Special on you and mention how the themes of peer pressure underlined a lot of Scott’s decisions, but I’m not in a preachy mode. Instead, I’m going to acknowledge how anger, aggression, and stress, along with hormones, are the inhibitors that Scott will have to learn and control to keep the beast inside. And for a teenage male, that’s one hell of a feat.

Another amazing moment last night came from the revelation that the body found mutilated in the woods was a) a werewolf and b) Derek Hale’s sister. The funny thing about these two tidbits was that they are part of a quadruple whammy when you throw in the wolfsbane bit and the fact that Derek’s sister could also morph into complete wolf form as well. Thank God for Stiles asking the question that plagued me from the first episode about why isn’t Scott turning into a complete wolf. Maybe that stage of being a werewolf comes with time? Who knows? The other question to be answered now is who in the hell killed Jackson’s sister? It couldn’t have been Allison’s dad since they just arrived in town, plus he wouldn’t have split her in two like that and he’s not a werewolf, which means he couldn’t have left the bite marks on her. Maybe there is an enemy pack of wolves out there? Yea, that seems like the most logical answer at this point.

Jackson is In Way Over His Head

This kid is going to be trouble and I already don’t like him. When he eventually puts two and two together, what will he do? Become 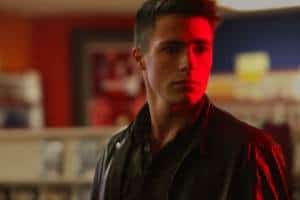 the school lunatic screaming about werewolves on the rugby team or will he just decide to keep the secret for himself? I have doubts on both of those suggestions, but I hope he doesn’t end up like the stereotypical jock who is either written out after the first season of a show (Smallville, The O.C., HEX, 90210) after the writers can’t find anything to do with him. I say they should eventually turn Jackson into a werewolf as well to have him be a true rival of Scott’s in the future. It will keep him relevant at least.

We know Derek has a temper, a dead sister, and a car despite seemingly having super speed, but as far as that goes, we are still in the dark about Scott’s werewolf big brother. Aside from him mention that there was more werewolves, I can’t help but wonder if he’s on the outs with them or what, because why would he turn Scott (besides it being wrong place, wrong time) unless he needs an ally of sorts? Maybe there is a war coming and he needs all the help he can get. Either way, Scott might want to learn how to bolt his window or something to keep the guy out.

That’s all for this week, and I probably missed something in this review and wouldn’t mind you guys tell me what that was as well as your thoughts on the show this far. Are you Team Teen Wolf or not? Either way, I’m ready for the werewolf to take over television and the take over begins here.