It’s alibi time, and John’s at Riley’s foster parents’place asking if she’s there. She’s most certainly not and her foster dad starts talking about how foster kids can just wander in and out and, hey, is that a phone I hear? It is, and, hey, it’s Riley. Or rather it’s ‘Riley’in that it’s Cameron doing her voice thing again. Foster dad’s all concerned, like he’s Coach Taylor all of a sudden, and he even mentions that John’s there looking for her, too. ‘Riley’asks him to pass the phone, which he does reluctantly. It’s obvious from the look on his face that John expected Cameron to drop the act and the voice when he got on the line. She does neither and proceeds to talk to him like she’s Riley. Like she’s really Riley, up too, and including saying, ‘I love you.’John hangs up quickly, wigged out. Back outside, he confronts Cameron about her prank, what did she think she was doing? Confused, Cameron insists that she was only making it more ‘authentic’using John’s reaction to cement the idea that Riley had run off. John’s oh-so not amused and when Cameron asks where they’re going next he corrects her. She’s not going anywhere with him, he’s going alone and he’s going now — walking off and leaving Cameron and the car.

Back in John Henry’s nursery, Ellison tells the AI that he really was not amused at John Henry’s game. Since john Henry assumes everyone likes games, he wants to know why. John Henry kept a secret — one that could have harmed Savannah and that is what Ellison considers fun. John Henry quickly works through the logic. She could have died. Her life is important. Human life is sacred. And if the child had died… “it would have been your fault.’Nice guilt trip, Ellison. ‘My fault?’John Henry whispers, clearly shocked and what passes for emotional. See? You made the machine sad.

Derek’s dropping Jesse off at her hotel, still distracted and thinking about Riley. Jesse tries to put a spin onthe whole thing, maybe if John realizes what the metal’s capable of, some good can come of it. Derek’s face is priceless and absolutely horrified. Riley was an innocent kid who got killed because of their war. There is no good in that. ‘None. Not ever.’Changing the subject, Jesse purrs that he’s still a good man and kisses him. ‘Don’t let anyone tell you different.’He kisses her back and they close the door. Yeah, I suppose for those two that probably is foreplay, but it was still kinda random. We cut directly to Derek leaving with an affectionate (for him) ‘Hoo-roo.’Jesse’s staring out into space again which means it’s time to… 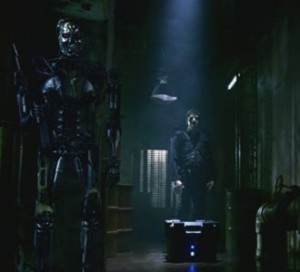 Flash-forward. Queeg’s explaining that they’re off-course because they have a new mission on an oil platform that wasn’t on their route. One Lt. Deitz, who may or may not have been the n00b getting hazed, is supposed to take a team, get on the platform and retrieve a package that they will deliver to Serrano Point. Jesse’s confused. They were talking essential cargo to Perth last time she checked, but she’s overruled. The orders are direct from John Connor. Curious, Jesse asks what’s in the package, does Queeg know? ‘Yes.’But he’s not going to tell her.

As the team departs for the rig, Jesse banters with Dietz affectionately, yet seriously, about keeping his eyes open. He calls her ‘Mom’and I have the sneaking suspicion that he’s not long for this world. On the rig, it’s a dark and stormy night. Sorry for the cliche, but it is. The team descends until they reach their destination. Dietz, leaving his gun behind, approaches his target, hands raised. There are two skinless endo-skeletons and an artificially-fleshed out third. He announces his intention, to pick up the box for Connor, and the skin-job picks it up, presumably to pass it over. My money says Fox felt like putting Summer Glau in a box again, any takers?

Sarah’s playing with fire and burning the spare parts. Cameron approaches and Sarah begins talking about putting a bullet in her CPU, solving about 50% of her problems and she wouldn’t feel bad about it at all. But she won’t, because John would never forgive her. She goes on, she doesn’t get it. Cameron, of all of them knows what’s at stake, knows why the ‘burn everything’rules are in place, and needing spare parts? Is not an acceptable excuse. It’s not about Cameron. Cameron agrees, it’s about John and his safety. And in that regard they are all a threat. Cameron, Sarah, Derek, all of them. Because John worries about them, cares about them, and will sacrifice for them – up to and including himself. He cares. Sarah doesn’t get it, how can she be John’s problem, but Cameron continues. ‘John is John’s problem. Humans are the problem.’And the only way for him to be safe is to be alone. Alone and uncaring. What kind of life is that, Sarah wants to know.

Sarah can almost believe it, because Cameron’s right. If you look back, every suicidally stupid thing John’s done, he’s done trying to help, or be with, someone else. In order to save humanity, he has to be prepared to lose his own. 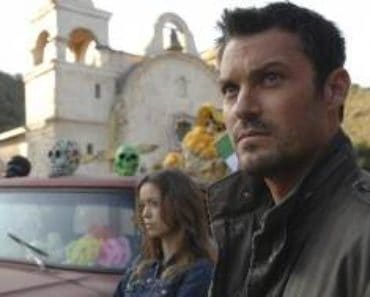 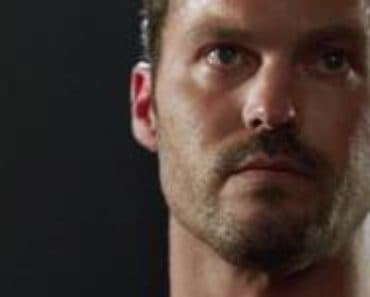 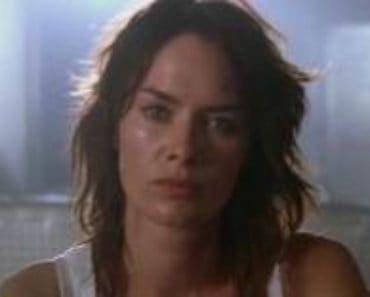 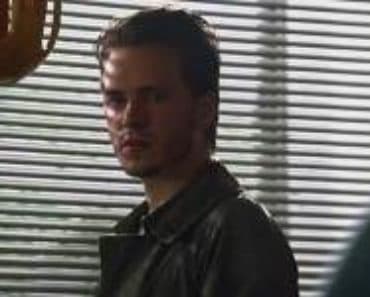 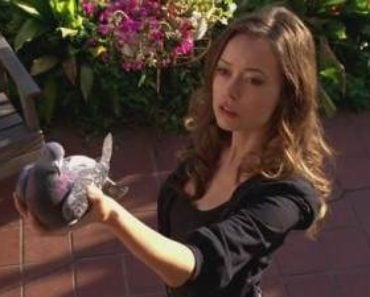 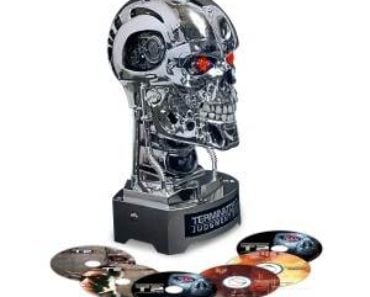