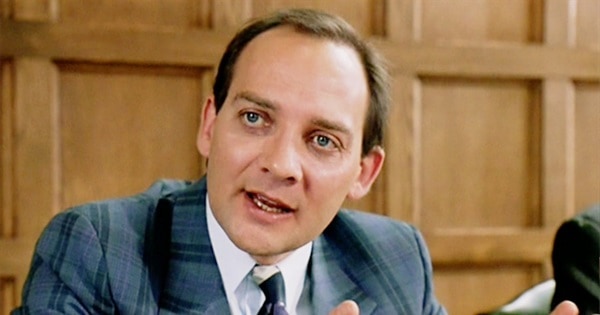 It’s amazing how little a person can be recognized by name even when they’re so prominent in so many projects. Zach Grenier does look like the kind of guy you might expect to be just like a few of his characters, but the idea that he can flip the switch and become someone else just as easily as any other actor is kind of impressive since there are characters he’s played that many people might agree are worth punting to the side since they appear to have no intrinsic worth. But the trick of this is that he plays them so well that if one steps back and divorces themselves from feeling and remembers that he’s an actor and not these characters, it’s easier to admit that he’s just that good and quite skilled at what he does. In a lot of his roles he does play someone that’s a bit weak, both of body and mind, but still has enough force to him to be believed as an actual character that’s somehow important to the story. This sounds like a contradiction of sorts since weak characters might not always be seen as pertinent to a story’s overall development. But the truth is that weak characters tend to be just as important to any story since they offer up a manner of development that people don’t always like to see since it can mirror real life in a very poignant manner. There are times when Zach does this and it’s hard to pay attention to since it’s more or less a reminder that there are in fact people like this in the world. But it’s also easy to thank Zach since he’s good at what he does, good enough that he manages to make a lot of other actors look good while still supporting the overall narrative.

One role that he accomplished in this manner was actually pretty positive since he played the part of Ted Reilly, one of the high-ranking members of Callahan Auto, and someone that might not have a lot of faith in Tommy but understands that the heir to the company wants to help. Reilly isn’t much of a naysayer but he’s also someone that’s quite cautious and doesn’t want to put the fate of the company in Tommy’s hands. But when all is said and done he’s also the kind of guy that knows when to give credit where it’s due since he ends up supporting Tommy when Callahan Auto is saved and he and every other worker get to keep their job. In this manner, Zach played a character that wasn’t a downer or someone that might be seen as depressing, but a cautious individual that didn’t want to bank everything on what felt like a huge risk. His role in the movie Fight Club was quite a bit different and could be viewed from a couple of different perspectives, though the part of Richard Chesler, the narrator’s boss, is seen as something of a corporate stooge that takes everything for granted. In short, he’s a power-hungry individual that doesn’t realize he has a very unstable person working for him and can’t recognize the narrator’s descent into madness since he’s so focused on being the big man in a setting that essentially doesn’t afford him much more than a position that is, at best, an empty facsimile of a human being.

Zach has played so many roles between TV and the movies that it’s easy to recognize him when he’s seen, but a lot of people probably don’t remember his name since despite being easy to pick out of a crowd his name isn’t the biggest part about him. There are quite a few actors that will be labeled as “that guy/woman from that show/movie” since they’re easy to find and easy to enjoy, but for one reason or another, their names just aren’t a big deal to a lot of people. Some folks do change their names when they get into show business and some don’t, but no matter what a person’s name is the fact is that their acting will tell a greater story than their name ever will since the simple fact that people remember someone from a movie or a TV show they starred in, even if their name escapes them at that time, is proof that their role was memorable and their acting talent is more than enough to keep them in mind. Zach has had a role as an extra, a supporting actor, and even someone that is kind of crucial to the movie at various points, but he’s never really been a leading man to speak of since like many people he has taken his place in the supporting roles and done his part. But thankfully he’s one of the many that we gladly remember since he’s very good at what he does.